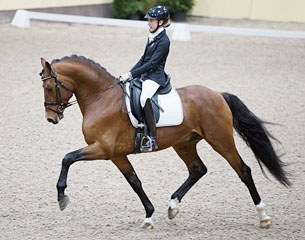 The bay stallion is bred by Sigrid Bergåkra and was owned by Cecilia, Emilia and Olivia Bergåkra. He is by Ampere out of Jasmina (by Troll x Granit).

He has been licensed for the Swedish warmblood society and did his stallion performance test as a 4-year old in 2014. He scored 8.19 for his basic gaits with an 8 for walk and trot and an 8.5 for canter. The test riders scored hm 8.0 and 8.5 for his rideability and potential.

Amaranth sired his first crop of foals in 2015. He was bred to 37 mares and 20 foals were registered in 2015. In 2015 he was only bred to 7 mares in Sweden. Sigrid Bergåkra lightly competed him in the young horse classes in Sweden with mixed results.

"Amaranth is such a nice and sensitive stallion with a top character," Charlotte told Eurodressage. "He has three super gaits with a big plus for his canter. He has a natural talent for collecting and loves to work.  He have a great conformation with a beautiful face and warm eyes."

Haid-Bondergaard plans to make her show debut with him in the next year's 7-year old division.

"Now we get to know each other and start softly working with the lessons for the 7-year old championship," said Haid-Bondergaard. "The plan was to take Amaranth with me to Mallorca and start him in the 6-year old classes, but now I let him be at home and give my other new horse that focus. I will I take three horses with me to Mallorca."