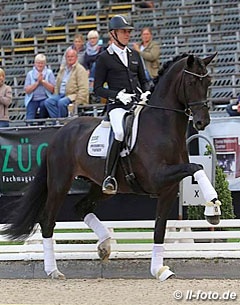 Bred by Andreas Klinker and owned by Kerstin Klieber, the dark bay Daytona Platinum is by Dante Weltino out of Greta (by Charon).

Klieber discovered the horse and he was reared at her yard Stall Sandbrink in Meinesen. Lukas Fischer began training and competing the horse in the spring of 2016. The pair was in the running for team selection for the 2016 World Young Horse Championships in Ermelo, but not picked.

At the 2016 Bundeschampionate Fischer and Daytona Platinum won the preliminary test with 8.90 points. In the finals he finished sixth overall with 8.10 points, after struggling slightly with the walk and submission in his test.

"Having looked for a longtime for a young horse, we immediately loved the quality and temperament of Daytona but with us both going to Rio, everything got put on hold until we had returned," Bigwood told Eurodressage. "I am so excited about the future of this horse as he seems to meet all the requirements of a grand prix horse."

Klieber is equally enthusiastic about the sale of her horse to such a high quality performance stable in Great Britain. "They looked at him and Anders tried him and was very impressed from his movements, potential and his character," Klieber told Eurodressage. "For Lukas and us it was nice that we could show him at the Bundeschampionat. At the end of this week they will pick him up to his great new home."