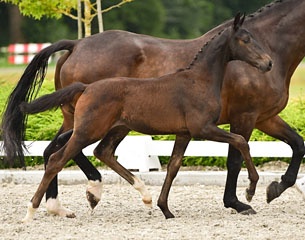 Livingstone (by Grand Galaxy Win x Uphill) became the second most expensive foal of the evening, selling for 12,000 euro.

The bay colt Lord Hennessy (by Hennessy x Farrington) switched owners for 10,000 euro. This colt was the reserve champion of the 2016 KWPN Friesland Regional Foal Champion and named best bred dressage colt of the show.

The most expensive jumper foal was the bay filly Lupina (by Grandorado x Berlin), which found a new owner for 9,500 euro.

The average price for a dressage foal in Dronten was 6636 euro. The jumper colts sold for an average price of approximately 6000 euro.