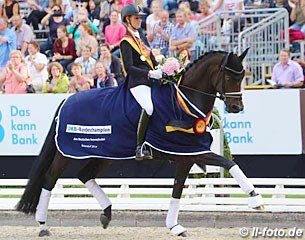 Laura Blackert-Stigler and Anja Walterscheidt's Rhinelander mare Deluxe became the winners of the 6-year old dressage horse finals at the 2016 Bundeschampionate in Warendorf, Germany, on Saturday 3 September 2016. Blackert and Deluxe scored an overall 9.0 for the national title. Silver went to Goldmond and Sonnenschein claimed bronze.

Judges Rolf-Peter Fuss, Henning Lehrmann, and Katja Westendarp saw the champion pair in Blackert and Deluxe (by Don Primus x Wolkentanz). Bred by Janet Stratmann, the dark bay mare scored 9.5 for trot, 8 for walk, 9 for canter and submission and 9.5 for general impression. With a total of 9.0 she earned the gold medal, champion sash and national young horse title.

Birgit Hild and the dark bay Trakehner gelding Goldmond (by Imperio x Latimer) improved their act considerably. While they were unable to truly impress at the World Young Horse Championships in Ermelo a month ago, in Warendorf they shone more. They finished fifth in the preliminary round with a 7.9 but in the finals, boosted that mark considerably to an 8.8 total and silver medal. The dark bay stallion, who is bred and owned by Ingo Wittlich, scored 8.5 for trot, 9.5 for walk, 8.5 for canter and submission and 9.0 for general impression. 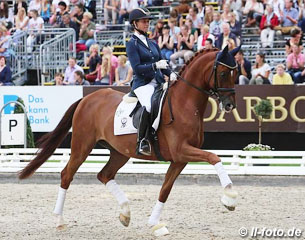 Nicole Wego and Connie Kang's Oldenburg stallion Sonnenschein (by Sir Donnerhall II x Bolero) put in an impressive climb on the ladder towards the bronze medal. They were 11th in the preliminary round with 7.60  and were referred to the consolation finals. By finished second in there with 8.0 they got their ticket to the Final round. The judges liked the chestnut stallion, who is bred by Alexandra Warg, and scored him 8 for trot and canter, 9 for walk and 8.5 for submission and general impression.