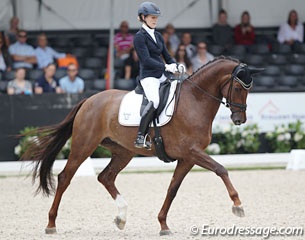 Victoria's Secret, the 2016 World Champion in the 5-year old dressage horse division, has been sold to Bolette Wandt and Andreas Helgstrand.  The Rhinelander mare arrived in Denmark yesterday.

Victoria's Secret (by Vitalis x Fidermark) is bred by Walter Schulte-Böcker and was owned by Andrea Klüfers and Matthias Fieseler of Rhenania Pferde in Alpen, Germany.

Under Beatrice Buchwald the liver chestnut Victoria's Secret won the 2015 Bundeschampionate in the 4-year old riding horse mares and geldings class. In 2016 she claimed the gold medal at the World Championships for young dressage horses in Ermelo, The Netherlands, scoring 9.5 for trot, 9.3 for walk, 8.9 for canter, 9.8 for submission and 10 for perspective.

"I'm really sad to loose Vicky because she's just amazing and a really special horse for me," Buchwald told Eurodressage. "But I'm happy to had such a great time with her and hope all the best for her future."

The 44-year old danish born Bolette Lyngby Wandt lives in London and is a design professional. She also owns Fine Time (by Furstenball x Sandro Hit), which was competed at the 2016 World Young Horse Championships under Danish based Australian Simone Pearce.

Helgstrand's assistant trainer Betina Jæger Jensen will aim to qualify Victoria's Secret for the 2016 Danish DRF Young Horse Championships, which takes place in Odense in October. Jæger Jensen will compete the mare this weekend at the last DRF selection trial in Herning on Sunday 4 September 2016.