Barbara Davis: "All My Horses Have Flourished on Equine 74 Gastric" 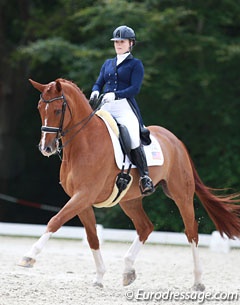 For brand new 2016 American Young Riders Champion Barbara "BeBe" Davis Equine 74 Gastric has become an integral part of her feeding plan for her FEI level dressage horses. The 18-year old Davis has been competing Feivel Mousekewitz and Rotano at international young riders level and with Equestricons Carrera she has made her first steps into Under 25 Grand Prix division. By adding Equine 74 Gastric to her mounts' diet, Davis has unlocked a new level of health and competitive success for her loyal equine partners.

Much is asked from high performance dressage horses who have to travel and compete on a regular basis. Often they develop ulcers from stress related activities, a problem numeruus dressage riders face and struggle with. After a long search for the right product, Davis' horses found relief in Equine 74 Gastric.

"One of my horses began to act very strangely. He was very tired and did not have a good appetite, which was very out of the ordinary for him. The vet diagnosed him with both front and hindgut ulcers," Davis explained. "We had tried many different courses of action with the horses before to either treat or prevent ulcers. However, most of them were either quite complicated or very expensive and not practical."

Davis discovered Equine 74 Gastric through her father Michael, who had heard about it word of mouth.

"Once I read testimonies from other riders and spoke to Anita van Slyke, the U.S. representative of Equine 74 Gastric, I thought it would be a great product to try. After receiving the sample and trying it, we were hooked," said Davis enthusiastically. She has now joined a string of highly acclaimed international dressage riders - such as Tinne Vilhelmson-Silfven, Pether Markne, Wolfgang Schade, Julie de Deken, Ludwig and Karin Zierer, Liz Diegutis, and Isabel Freese - who swear by it.

Barbara believes Equine 74 Gastric stands out as an ulcer prevention and treatment product for numerous reasons. It not only prevents gastric ulceration but it helps alleviate excess acid in a horse's stomach by absording it.

"Equine Gastric is so effective and so easy to use, and the horses also love the taste," she said. "Equine Gastric is the best product I have used thus far in treating and preventing any sort of stomach problems. At the moment all of my horses get it. They have all flourished while on the product. It has a calming effect on my more excited horses, but does not make them lazy. It is an incredible product and far superior to other ones I have tried. Most products only treat stomach ulcers as well as other issue. However, Equine Gastric not only treats but prevents these issues from even occurring." Barbara began feeding Equine 74 Gastricas of January 2016 and has seen a notable difference in all her horses.

"They are not only looking healthier, they also feel much happier and healthier," said Davis. "Their coats are gleaming, they are eating all their food and in general they have improved so much. All of the symptoms have cleared up and it is clear that they are feeling their best."

Bebe is now more than ever looking forward to the 2017 show season. She will continue to compete at Young Riders and Under 25 level at the Global Dressage Festival in Wellington, Florida, while attending Lynn University for a Bachelor degree in entrepreneurship and fashion marketing.

Related Links
Julie De Deken: "I would Recommend Equine 74 Gastric to Anyone"
Pether Markne: "With Horses I Don’t Like it Complicated, so I Choose Equine 74 Gastric"
"The Alarm Bell Rang When My Mare Started Showing Anxiety and Naughtiness Before and During Her Performances"
Karin Zierer: "We think that Equine 74 Gastric is Good for Our Horses"
Tinne Vilhelmson-Silfven Relies on Equine 74 Gastric for Her High Performance Dressage Horses
"My Horses Can Do Without Omeprazole Now" - An Interview with Wolfgang Schade