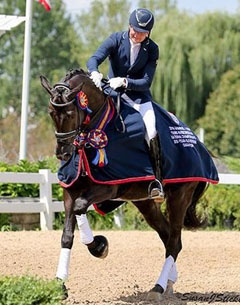 The judges remained pleased with the growth of the young horses. However, they ultimately awarded Endel Ots (Wellington, Fla.) and Lucky Strike the Six-Year-Old National Championship. They had a superb preliminary test on Friday for a score of 8.64. He and Max Ots’ Hanoverian gelding (by Lord Laurie x His Highness) had a clean final test. Lucky Strike stayed present with Endel the entire test, and the judges saw the commitment of their partnership. However, they wanted more engagement, overall. They earned a score of 8.50 for an overall score of 8.60.

“I am so thankful for Christine Traurig’s help; it has been invaluable. I absolutely could not have done it without her. She has been above and beyond supportive. Coming to clinics in Florida and then helping me here. I showed here when I was 15 years-old, so there’s people I have known over 10 years so it’s really nice to come to Lamplight and be on these show grounds,” said Endel Ots.

Fresh off winning the Reserve National Championship on Saturday, Parra (White House Station, N.J.) earned the Six-Year-Old Reserve National Championship with Don Cesar on Sunday. His own Westphalian gelding (by Desperados x Manhattan) had excellent walk work to earn a score of 8.28 in the preliminary test for second place in the division. They had nice pirouettes but lacked definition in the trot work during the final test. The judges gave them a score of 8.540 for an overall score of 8.436.

“I was happy with him today. It was a little hotter today, but I was happy with the scores. The comments were very encouraging. It is exciting; I am very honored to have two horses that are Reserve Champions. I think it is a testament to the whole team. I am in great company with two amazing riders [Michael Bragdell and Endel Ots] and their horses,” said Parra. 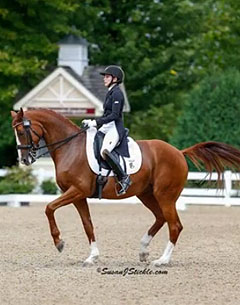 Jane Karol (Concord, Mass.) and her own Sunshine Tour (by Sir Donnerhall x Alabaster) had a more relaxed, expressive test on Sunday for a score of 68.750%. With more power and balance in the movements, they earned the 2016 Developing Grand Prix Horse Championship with an overall score of 66.917%. On Friday, tension got the best of the 2007 Oldenburg mare, but the combination held it together for a score of 64.167 in the first round test. This is the first National Championship for the combination, as they earned the 2013 Six-Year-Old Reserve National Championship title.

“This is surreal. There were wonderful horses and riders here, but I thought she could do this, and she was great today. She was with me; she was listening, and I got wonderful help right before from Scott Hassler and Margaret Freeman helping me on how to go into certain movements. Thankfully, I listened,” said Karol.

Holger Bechtloff (Wellington, Fla.) and Clapton JP earned the 2016 Developing Grand Prix Horse Reserve Championship title with an overall score of 66.040%. He and Peggy Mills’ 2007 KWPN gelding (by UB40 x Ramizo Z) lacked rhythm in Friday’s first round test but still had a pleasing performance for a score of 65.351%. On Sunday, the gelding came to the arena eager to please for an improvement in the final test for a score of 66.500%

“We are kind of in a funny stage of underreacting or overreacting. His quickness could be detrimental. We are a little electric at moments and just a split second behind, but overall for where he is, I am very happy with him. He tries his heart out,” said Bechtloff.

Petra Warlimont (Evergreen, Colo.) placed third with an overall score of 63.749%. She and Highschool MCF, Susan Alvey’s 2006 Hanoverian gelding (by Hochadel x Rotspon), placed fourth in the first round test with a score of 64.875%, improving in the final test for a score of 64.875.