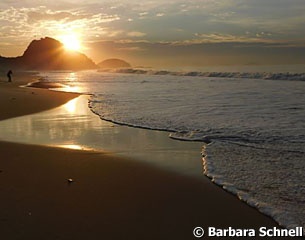 No one can say I hadn't been warned. My husband plays keyboards in a German Latin band. Their name is „Boa Sorte“, their singer a Carioca hoping to become a German soon. She had begged my husband not to let me go to Rio de Janeiro, it was too dangerous. So I was more than a little nervous when I discovered that my little hotel near the town center was over an hour by subway and train away from the Olympic equestrian venue at Deodoro

… and that the sun sets a few minutes after five at this time of the year in the City of God, public transportation and the dark having been among the worst dangers she described.

The qualms lasted for about five minutes. Then I stepped into a subway filled with volunteers from all across the globe on their way to the various locations of the Olympic Games, eager to meet new people. At the central station (world famous from Walter Salles' 1998 movie „Central do Brasil“), I changed into a SuperVia train that was to become my lifeline – not only because it was the connection between my sleeping place and the dressage competitions of the 2016 Olympics, but also because it fed me. While the catering at Deodoro was next to non-existent, on the train you could buy delicious cookies, ice-cold bottled water and even Brigadeiros (oh, man …) for the equivalent of a few Euro cents. Add the bananas I bought from the street vendor outside my hotel, and I was good to go. 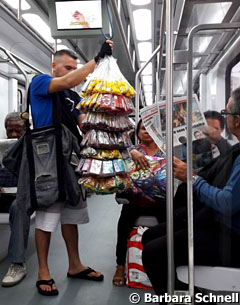 My first impressions were a caleidoscope glittering with contrast, just as the whole trip would eventually be. A subway with cars reserved for women (can we have that, too, please?), people offering me their train seats while outside the legendary Maracana arena would show its not so pretty backside, followed by favelas perched impossibly on the sprawling hillsides. Street musicians entering a train, striking a few chords, and the whole car would burst into song, applause and laughter.

Magalhaes Bastos was the stop at the Olympic Equestrian Center, where the streams of visitors would be greeted by armored reconnaissance vehicles and armed soldiers. Despite the grim picture, the security check was relaxed and friendly, and a bit later, more of the same soldiers would be found posing for selfies in front of the Olympic jumbotrone.

And so, the games began, against the spectacular backdrop of the Teresópolis Mountains. I entered the arena to look for a good place in the stands, and the first song that rang out of the speaker system into a suprisingly chilly Brazilian morning … was „Boa Sorte“. Rio had me there and then. Conditions for the horses and riders at the Deodoro compound were top notch, solid stable buildings with big stalls, super footing that was well cared for, volunteers everywhere keeping the surroundings clean. Conditions for the spectators … not so much. The arena was surrounded by nothing, a hot dog booth, a soft drink booth, no trace of the proverbial awful lot of coffee in Brazil, leave alone a place to stop and have a chat with old or new acquaintances. It was a very sober affair – you're here for the sport, folks, focus on that, and when it's done, please leave quickly.

„Um mundo novo – a new world“ was the official slogan for the Rio games, and for an optimistic soul like myself, the dressage competitions did indeed seem to promise a dawning of change. Sure, there were still discrepancies in the judging, there were scores for crooked movements that left the expert witness blinking with disbelief, and a clear „no“ to loss of balance and rhythm would have been nice. But on the whole, harmony and easiness were rewarded like never before, and negative tension just wouldn't get you to the top anymore. The dressage competitions in Rio held many unforgettable moments, the biggest maybe Isabell Werth's fanstastic „metronome“ dance with Weihegold that gained them victory in the Grand Prix (and was a huge contribution to Germany's team gold medal), but also small glimpses like Cathrine Dufour's mother Mona standing at the warm-up holding the same mascot she carried to the 2010 Kronberg Junior Europeans that saw the rise of Cathrine and Cassidy – what a long way this pair has come! And, of course (yes, you may call me partial; that medal was the heart of my trip to Rio) the moment the Rothenberger family's intense teamwork was rewarded with a gold medal for Sönke and Cosmo as part of the German team. Leaving the dressage „bubble“ at Deodoro and returning to the city, I heard much talk about the empty stands in the arenas at the Rio Olympics, combined with the question whether a place in economical and political uproar should have been granted the Games in the first place. While western places like Hamburg have decided against an Olympic bid and turned much potential into nothing, the problem-plagued city of Rio de Janeiro turned little into much. Where perfection was impossible, improvisation did the trick. Of course the stands were often empty. Many tickets were were reserved for sponsors who never claimed them. Most others were simply too expensive for the Cariocas. That didn't mean they weren't there, though – in the bars around the arenas and all over the city, people would follow the Games on TV, cheering for their athletes. They'd be playing volleyball on the Copacabana beach, right at the foot of the Olympic stadium, or soccer in the streets, jogging on the beach at sunrise or cycling along the Atlantic coast on tracks built and reserved for runners and cyclists. Sport was everywhere. 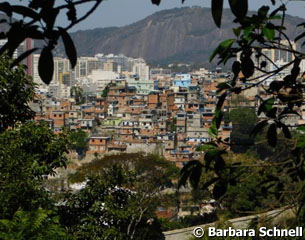 It may not always have been up to „our“ standards, but Rio did what it could, with all its heart. But it is a city of contrasts, glittering harsh as ice. A city of people like the singer who couldn't wait to leave because she didn't want to bring a baby into a place where her friends are robbed at gunpoint. People like the receptionist at my hotel, who lives in a favela but prefers the word „community“ because it doesn't occur to him to see his neighborhood as a bad place. People like the cook in our hotel, or the steel manager I met on top of the Sugar Loaf, who, after living and working in Germany for a while, couldn't wait to get back to the Cidade Maravilhosa. A city where you can take picture perfect snapshots of the Sugar Loaf while a homeless man is sleeping at your feet. A city that fights the impossible fight to improve the living conditions in the favelas while making a grand statement for ther importance of education with the renovation of its National Library – and smaller, just as important statements like the funding of Santa Teresa's wonderful neighborhood cultural center Parque das Ruínas with its outdoor stage and mobile cost-free library. A city whose inhabitants often take matters into their own hands … sometimes with stunning results like Jorge Selarón's now world-famous tiled stairway.

Should the Games have been granted to Rio de Janeiro? By all means. Here's hoping that in the long run, a new subway won't be all its citizens get to keep for their troubles and their generosity.