Rocking in Rio: Pleasantly Surprised by the City of God 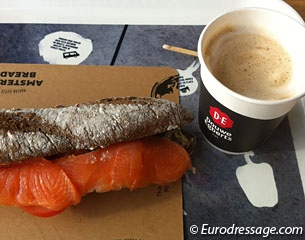 I have to admit that leading up to the 2016 Olympic Games I felt quite a bit of anxiety and anticipation. The entire 2016 show year was all about working towards a competitive climax in Rio. The negative reports from delayed construction, the political turmoil in the country and a hefty bill of 3600 euro, just footing the economy class plane ticket and one week in a 1* dormitory room in the press hotel, did not bring a smile to my face.

I didn't have the best experience at the 2012 London Olympic Games. Of course the competition was stellar, but working the event was far from fun: too many long hours, total isolation in a mildewy dormitory room in Greenwich and no contact with colleagues or friends. No, I can list twenty international competitions that I cherish much more with fond memories. So I departed for Rio with a mental handbrake on, but I have to confess that with all the news that I was posting from riders and photographers who had already arrived in Rio, my curiosity grew as well as my willingness to step into a new adventure. 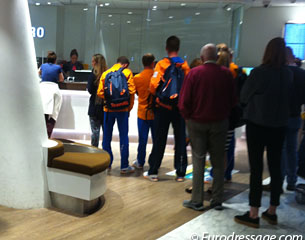 It was an early wake up call - yet again - but I had a smooth drive to Schiphol airport in Amsterdam and was there well on time (3 hours ahead of departure). I had a nice breakfast with a cappuccino and a salmon baguette and strolled around the shops with no intention of buying. At the gate athletes were gathering and it was pretty clear to me that I would be on a plane full of people with only one goal: the Games. The Polish and Kazachstan wrestling team loitered around, as well as Dutch show jumping team who were all exchanging euros for Brazilians reaies at the bank. The 2012 individual bronze medalist Gerco Schroder used his frequent flyer miles to boost himself to business, but the rest of the team including chef d'equipe Rob Ehrens, flew coach.

KLM surprised me. My last flight on board a KLM blue bird was in 2005 to Kuala Lumpar and we sat packed like sardines in that Jumbo jet. Never again, yet this time it was all fantastic. Super friendly flight attendants, good seats, delicious food, and a very interesting choice of inflight entertainment. I ended up watching three movies on the 11-hour flight: "Demolition" with a strong Jake Gyllenhaal, the brainless and disappointing "Allegiant", and the lovely La Piscine remake "A Bigger Splash" with Ralph Fiennes and Tilda Swinton in brilliant roles. Of course the handsome Belgian shooting star actor Matthias Schoenaerts was the icing on the cake.  I finished the flight with reading another 100 pages in Per Olov Enquest's "Lewi's Journey" before touch down. 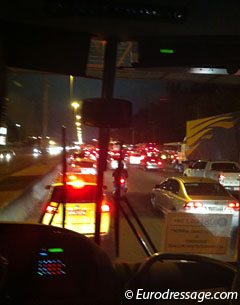 I remember from London that accreditation at the airport went smoothly and Brazilian efficiency was no less. I had my press pass in minutes, my suitcase in ten and I stood at the curb maybe 30 minutes later after getting off the plane. Tons of volunteers were helping the passengers find their way to transportation. Although they are not super fluent in English, they were extremely attentive and helpful. I had to wait 20 minutes for the bus to the Deodoro Accommodation Village and in the meantime got acquainted with U.S. soldier Matthew McCarthy, who is stationed in Hochfels, Germany, and volunteering to work at the Mountain Bike race park which is also part of the Deodoro Olympic competition area.  Matthew couldn't believe his eyes when we hit the crazy rush hour traffic and saw the crummy concrete favelas. The bus driver displayed superior driving skills not crashing against motor bikes and small cars crawling like ants through total gridlock. Initially the drive to Deodoro went smoothly on the specially reserved Olympic lanes, but one part of the stretch was on a "normal" four-lane road and we got stuck for a while. The sensation of delirious traffic in a third world country is not unfamiliar to me. I felt like I was back in India, but only the cows in the street and honking rickshaws were missing. 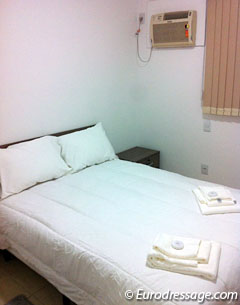 The Deodoro Accommodation Village (DAV) is an apartment complex within the Rio military compound. It has, I guess, 12 tall apartment buildings, each with three bedroom flats. The lady at the reception desk worked smoothly and within 10 minutes from checking-in, I stood in my starch-white room in a totally uncosy flat. Two more rooms were taken but I had no clue by whom. I just dropped my bags and went back downstairs, where I saw Dutch colleagues Remco Veurink, Arnd Bronkhorst and Peter van Pinxteren catching dinner in the restaurant tent. We had a quick chat. By that time I must have been up for 22 hours, but the day wasn't finished. I decided to get all the official stuff done straight away and needed to head to the Main Press Centre (MPC) where all photographers have to pick up their mandatory photo vests to be allowed to photograph at an Olympic venue. So even though zombie mode was setting in, I hopped on the bus and went to the MPC. A special motorway called the "Transolympic" was made for the 2016 Games, connecting the Deodoro venues with Barra, where the MPC is located as well as the aquatic centre and Olympic village. During the entire drive on the transolympic there was not a single car in our lane, so we cruised at a comfortable speed. The MPC is a  central hub for the 25,000 media people working at the Olympic. It is open 24/7 during the Games and it is like a bee hive. I had my vest in two minutes, went back outside and grabbed a quick salad in the restaurant which I ate outside at a picnic table. The temperature in Rio is just perfect: 25 ° C, a nice breeze, not humid.. Just lovely.  I went back to the bus that brought me to DAV, I worked a bit on the computer before desperately needing some sleep. I was awake for 25 hours by then.

Three hours later, I wake up, totally overheated and with a mosquito interrupting my sleep. Zika or not, I started a skeeter-hunt. The entire bedroom is white so you would think you would actually see the critter, but I did not. I ended up putting the air conditioning on, but that was as loud as a bus crossing the Andes. Still I preferred the not-so-cool breeze to the sound of a mosquito. I woke up early on Tuesday morning and worked on the computer. I wanted to get all the necessary computer tasks done before making my way to the equestrian venue. It was the eventing finals with show jumping today so I had all the time in the world to explore the venue, see where the press centre is, where the photographers can stand, and hopefully shoot some dressage riders in training.

My plan worked beautifully. The drive to the Equestrian Venue took 15 minutes within the military compound. Huge buildings guarded by soldiers - many of them look like (African) child soldiers; they certainly are not 18 -- were lined up on the round which provided safe passage from DAV to the show grounds. Military schools for the infantry, pilots, engineers, and police can be seen on the main road which leads to the hockey venue and equestrian stadium. It did give a safe feeling, even though we are warned to keep our camera equipment glued to our bodies. 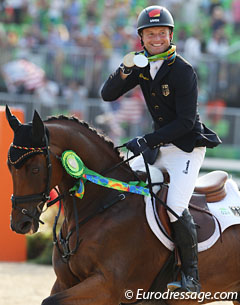 At the show grounds, I checked out the press centre and the stadium. It's immense and so impressive. The Championship feeling is certainly there and the view from up top is breath taking with the  mountains in the background. Well done Rio !! I prefer this show venue much more to London 2012 in Greenwich. The voluteers are equally as friendly but just so much more relaxed and we have much more freedom here to move about without being forced to walk the line. I sat by the warm up ring the entire afternoon before finishing the day shooting the eventing prize giving ceremony. I love my shots of Michael Jung and Sam who won individual eventing gold.

Tomorrow is the first group of Grand Prix riders. Down to business!