Training Days at the 2016 Olympic Games 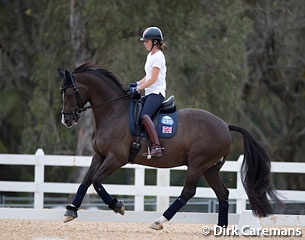 For the dressage riders at the 2016 Olympic Games in Rio de Janeiro, Brazil, it's counting down to the horse inspection on Monday afternoon 8 August 2016. There is one day in between the jog and the Grand Prix on Wednesday 10 August. Riders are slowing building up to top form and the photographers on the scene are able to take great training photos.

Eurodressage's very first in-house equestrian photographer and most loyal friend, Dirk Caremans, is sharing a selection of his training photos from the Deodoro equestrian centre.

While most countries are still tight-lipped about their starting order, the Dutch Equestrian Federation has announced that Adelinde Cornelissen and Parzival will be the first to go for their team, followed by Edward Gal on Voice. On the second Grand Prix day Diederik van Silfhout on Arlando and Hans Peter Minderhoud on Johnson will ride. 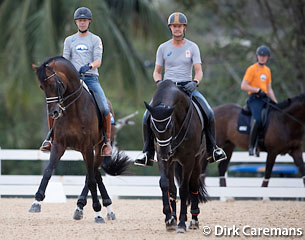 "Someone has to go first and for us it will be Adelinde," said Dutch team trainer Johan Rockx. "Edward indicated that he likes to have an extra day for Voice in between the Grand Prix and Special. That is why he goes second, which gives him that extra day. Hans Peter scored best at the observation trials and I want him as last to finish the job. That is why Diederik is riding third.

The vet check for eventing took place today and the 3-day discipline will take centre stage as the first of three Olympic disciplines to be held at Deodoro.