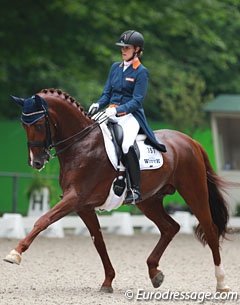 All dressage horses have arrived at the 2016 Rio Olympic Games with a special flight from Liège airport in Belgium on 1 August 2016. Strikingly absent in this cargo was the Dutch team reserve. The Dutch reserve riders have deliberately declined the opportunity to take their horses to Brazil and be on stand-by in case a horse drops out before the start of the competition.

The Dutch dressage team includes Hans Peter Minderhoud on Johnson, Diederik van Silfhout on Arlando, Edward Gal with Voice and Adelinde Cornelissen on Parzival. The latter is a 19-year old seasoned competitor, whereas Voice just returned to fitness and only competed in one Grand Prix class for team selection.

Madeleine Witte-Vrees and the 9-year old Dutch warmblood stallion Cennin were officially appointed traveling reserve. The alternate reserve option would have been Emmelie Scholtens and her 11-year old stallion Apache, but the stallion is known for being a not so brave traveller.  At the 2015 CDIO Compiegne in June the horse go so upset in her temporary stall that he had to be brought back home before the competition began. Danielle Heijkoop and her 17-year old Siro were another option.

In agreement with the Dutch equestrian federation and team trainer Johan Rockx, Witte-Vrees and Cennin have stayed home. Holland only has four dressage horses in Rio with no alternate option.

"It is a truly great risk to travel to Rio with a 9-year old who still has his whole future ahead of him," Witte-Vrees told Eurodressage. "Crime reigns there. Politicallly and economically it's chaos there. This is why after careful consideration we decided to remain a reserve until the plane left. Not only I but also Danielle and Emmelie all had our reasons for not going. We were offered the choice to travel or not by Johan Rockx. In the end, they still have a scratch score in Rio."