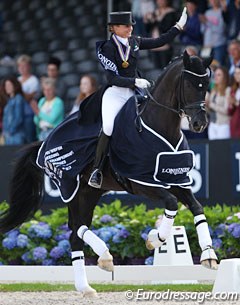 With the prize giving ceremony in which Sezuan and Dorothee Schneider were crowned World Champions in the 7-year old division, the first edition of the World Championships for Young Dressage Horses in Ermelo, The Netherlands, had a magnificent ending on Sunday afternoon 31 Juy 2016.

He was already a two-fold world champion and the Danish Warmblood-stallion again proved to be invincible in the first World Championships for for seven-year-old horses. The Zack x Don Schufro offspring, bred by Linette Jaeger, made history in Ermelo. Dorothee Schneider rode the black pearl owned by  Gestuet Peterhof to the winning score of 89.005%: a hat-trick for the black stallion which received a 10 for perspective from the judges.

"'Wow,' said judge Mariette Sanders-Gansewinkel the assessment of the jury. “Sezuan has a very energetic, swinging and uphill trot in which he shows a good cadence: a 9.8. The fantastic walk has a beautiful four-beat and also receives a 9.8. The canter is his best gait, with enormous power. But today he was a little tense right before the flying changes, therefore ‘just’ a 9.4. A technical piece of art, but the tension in the changes and the hind legs together in the first pirouette result in a 9.3 for the submission. And the perspective… well, that could only be a 10!”

Dorothee Schneider was on cloud nine with her third world championship title: “This is something extraordinary. I want to thank the owners that I can ride him. Sezuan is a sensational horse with three excellent gaits that always wants to work with me in the test and always wants to make me happy. I have been working at Gestüt Peterhof for about 3.5 years now and I think it’s incredible to ride such a horse. The Nurnberger Burg Pokal is probably also on the planning for next year. Afterwards we will work on the piaffe and passage and prepare for the next step. We take things slow and let Sezuan be a horse. We will see when the time is right and he is ready for the next level.” 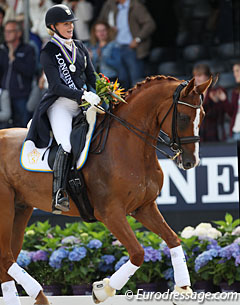 The silver medal went to the Swedish warmblood gelding Fiorucci HT. Sire Florencio won the 2004 and 2005 World Championships for Young Horses. The chestnut, bred by Absolut Dental AB, was presented impeccably by the pregnant Jeanna Hogberg who is due with twins this November. The pair scored 80.253%. The highest grade was for submission, no surprise after such a lovely test. A fantastic horse to watch: the fluent trot has a beautiful silhouette, in which Fiorucci remained in nice contact: 8.7. An 8.5 for the fluent canter with lots of balance. The walk deserves some attention and received a 7.2 because it could show a tad more activity and more consistent length of strides in the collection. However, the 9.2 for submission and 8.8 for perspective brings the total to a great score, enough for silver.

“Fantastic, I was already surprised to place third in the qualification and now we even got silver! He is such a nice horse and performs the test with such ease, so I am really happy with this result," said Hogberg.

Stefanie Wolf presented the Rhinelander registered mare Saphira Royal, bred by Herberth Werth, and won the bronze medal. The daughter of San Amour out of a dam by Monteverdi suffered from tension in the qualification, which resulted in a mistake in the canter, but in the Finals the bay mare made her comeback. In a focused and harmonious test she showed her quality in the three basisc gaits: an 8.4 for the expressive trot, an 8.9 for the walk and an 8 for the canter. The submission was rewarded with a 9 and for the perspective Johan Hinnemann's mare received an 8.7. The average of 78.641% resulted in a place on the podium. “Today I tried to ride her like I normally do. This went well, it is unbelievable that we actually won a medal. Simply amazing. Saphira Royal was fantastic and honestly I still cannot believe it," said Wolf.

Organizers Ecstatic with First Ermelo Edition of the WCYH

“Verden is a phenomenon, the World Championships traditionally hosted in Verden, Germany, have a fantastic reputation, so we realized that we brought quite a challenge upon ourselves," said show organizer Aat Both. "One we happily sunk our teeth in. We are very proud to have been the first to organize the championship for seven-year-old horses. Numerous participants showed interest in the classes for five- and six-year-olds: so much that there were no spots left to hand out the wildcards. Also the championship for 7-year-olds featured a large field of competitors. Compared to last year, we were able to double the prize money to a total sum of 50,000 euro. The whole terrain was filled with a buzzing crowd and the seated tickets for the main arena were sold out for the Friday, Saturday and Sunday. In total, we welcomed nearly 20,000 visitors from 27 different countries. .

Jan Pedersen, president of the World Breeding Federation for Sport Horses responded: “When it was decided to organise the World Breeding Dressage Championships for Young Horses in Ermelo, I was a bit sceptical. Verden has always been a great success and has been able to develop over many years. However, I must say this is rather fantastic. The whole venue looks impeccable and it is well-organised. I received solely positive reactions from both the riders and the audience. It is obvious that the organisation invested a lot to make this a grand success. Especially the main arena looks incredible and the horses also seem to like it, they are all very calm.”

“Every year I am impressed with the quality of the horses, it appears to improve each edition. Remarkable, because you would expect it to stop at a certain point. It proves that our breeding is still developing. This year we also saw absolutely fantastic horses, it is definitely more normal now to have horses scoring over 90%. Every year there are a few horses that stand out. In the five-year-old class the winning mare is truly something special, but also the 6- and 7-year-olds have a phenomenal top horses. By now we have established a strong connection between successful young horses at these championships and their future in the Grand Prix. I expect to see most of them back in the Grand Prix and lots in future Olympic Games.”