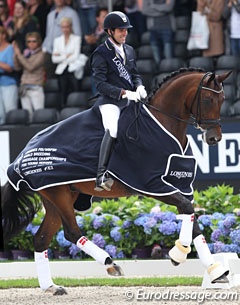 Spanish Severo Jurado Lopez and the Danish bred and owned mare Fiontini stood apart from their competitors in the 6-year old finals and won their second, consecutive gold as well as the title at the 2016 World Championships for Young Dressage Horses in Ermelo, The Netherlands, on Sunday 31 August 2016. The silver medal went to Dutch warmblood stallion Five Star, the bronze was for Oldenburg stallion Sir Olli.

The 6-year old finals on Sunday morning brought out the crowds to the national headquarters of the Dutch Equestrian Federation and KWPN society. In a sell-out stadium crowd favourite Severo Jurado Lopez and the bay Fiontini brought the spectators to their feet, clapping hands even before the final halt at X took place. Their victory was a given.

Fiontini is an embryotransfer product by Fassbender out of a Romanov dam. She is bred and owned by Hanne Lund and Henrik Hansen. Fiontini's full sister and peer Fiotina, who won silver at the 2015 World Young Horse Championships, was absent from this year's edition with her rider Andreas Helgstrand as she is recovering from an injury.

Fiontini appears far advanced in her training and already has impeccable balance and self carriage in the collected work. In the finals' test the trot work was well engaged and powerful, but overcollected and too slow in tempo. The pair entered the arena past the 45 second time-limit and they were not immobile in the first halt. The trot was bouncy with huge extensions, but the mare lacked bending on the left volte and tilted in the left half pass. In the half pass right she dropped behind the vertical. Fiontini stood out with her elasticity but overall the hind legs could be more under the centre of gravity and show more impulsion. The collected walk was clear in the rhythm but tense as she got tight in the topline. The turn on the haunches was good. The canter strike off was not so pretty, but the canter work was active yet sometimes a bit croup high. The fourth flying change was not so straight, but the mare has no issues changing lead and was uphill and strong in the extension. The mare was not really chewing on the bit nor foaming. 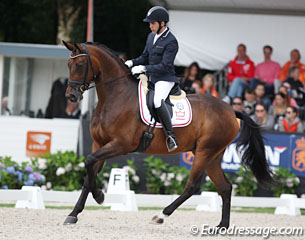 The crowds and judges panel, consisting of Kurt Christensen (DEN), Mariano Santos (ESP), Maria Colliander (FIN) and Sharon Rhode (RSA), were elated. The judges threw with high points as if it were confetti: 9.8 for walk, 9.5 for trot, 9.7 for canter, 8.9 for submission and 10 for perspective to total 95.80%.  "She has so much perspective," said judge Rhode. "The trot is lovely, clear and ground covering but the rider has to take care it doesn't become too passagelike for a young horse," she rightfully commented! "The extensions blew us away. In canter the horse has wonderful propulsion." Rhode also remarked that "in the submission there is room for improvement. The lateral bend could be better."

Jurado Lopez, who will travel to the Rio Olympics as a Spanish team member on the Danish owned Lorenzo, said that Fiontini "gives you a fantastic feeling and is always focused. I am extremely happy that she could show her qualities here, so everyone could see her talent. She deserves that!" 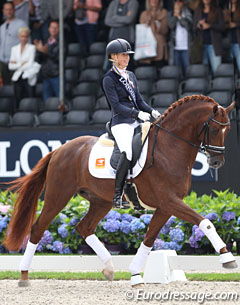 Dutch Kirsten Brouwer and the Singaporean owned Dutch warmblood stallion Five Star (by Amazing Star x Jazz) got the silver medal. The very handsome, muscled stallion is an eye catcher in the ring with his looks and big neck. The halt at entry was not immobile. In the trot work the horse had a good rhythm in the lateral movements, but he needs to be more ground covering. The half pass left was mediocre as it lacked crossing and the horse got against the bit. In the collected walk Five Star got slow in the rhythm, but the extended walk he was relaxed and had good overstep. The canter was uphill and he produced four sweeping changes, even though the third one was crooked.

The judges awarded the chestnut 8.7 for trot, 9.0 for walk and canter, 8.8 for submission and 9.0 for perspective. With a total of 89.00% Brouwer and Five Star were the silver medalists. “This is very special, in front of my home crowd," said Brouwer at the press conference. "Five Star is amazing: he always does the best he can! I am thrilled with our medal and I hope to ride him here in the seven-year-old class next year.” 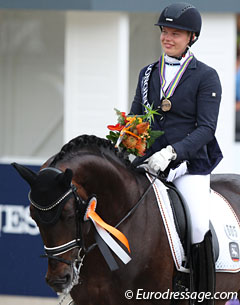 German Ann-Christin Wienkamp and Vivien Küst's Oldenburg stallion Sir Olli (by Sir Donnerhall x Florestan) were the third place-getters. The dark bay stallion is an incredibly supple horse with much swing, suspension and airtime in the trot, but his slightly sunken back and typical Sir Donnerhall hindlegs, which are quick enough, but not really reaching under the centre of gravity. Sir Olli's top line is a bit wobbly in trot and often gets behind the vertical as he cannot properly carry himself on the hindlegs. In the walk he has huge overtrack in the lengthenings, in the collected the rhythm stays clear. The stallion is supple and springy in canter and showed big flying changes, although there was an issue in one and  he regularly dropped on the forehand. The stallion looked slightly tired at the end of the test.

The judges gave the sympathetic bay stallion an 8.8 for walk, an 8.5 for trot, an 8.9 for canter, an 8.7 for submission and an 8.9 for perspective. They totalled 87.60% for the bronze. The judges praised the horse for "marching well into the bridle in the walk" and for being "free moving with elegance and suppleness" in trot. “I caused the mistake in the changes,” says his rider. “But he was very focused and gave me an incredible feeling." 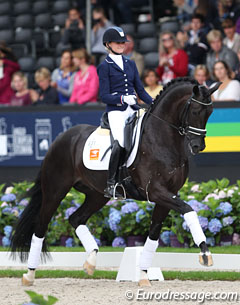 Dutch Marieke van der Putten and KS Horses' Dutch warmblood Four Legends (by Wynton x Ferro) is the higher quality horse compared to Sir Olli, but a ton of issues in the flying changes and some other smaller problems in the ride kept them from the podium. The elegant black stallion was not immobile in halt, but had really good swing and ground cover in trot. The extensions were huge, but were slightly rushed. The collected trot appeared more as a medium trot. In the voltes he dropped behind the vertical or tilted and the horse had a trembling lower lip, which does not indicate a relaxed mouth. The collected was not entirely clear in the rhythm but the extended was lovely. The stallion is uphill and active in canter, but he has issues in all four flying changes which were not quick and through to the aids.

The horse scored 8.5 for walk, 9.8 for trot, 9.0 for canter, 7.2 for submission and 9.0 for perspective to total 87.000% for fourth place. The judges liked the "lovely, active, uphill trot" but strangely said the walk was "clear and rhythmical". Four Legends sold at the Excellent Dressage Sales auction on Saturday night, the evening before the finals, to Taiwan for 605,000 euro. 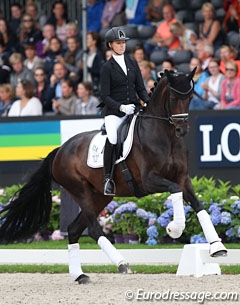 Laura Blackert (née Stigler) and the super lady-like and graceful mare Deluxe (by Don Primus x Wolkentanz II) completed the top five. The trot work is very lightfooted but needed more push from behind. She had a wonderful rhythm though. The walk had a clear 4-beat rhythm but could have had more stretch over the back. The canter was uphill and well balanced but the first flying change was hesitant. The extended canter had much scope and ground cover.

The Rhinelander mare ,which is bred by Janet Stratmann and owned by Anja Walterschiedt in partnership with the rider, scored 8.2 for walk, 8.5 for trot, 8.7 for canter, and 8.9 for submission and perspective to finish on 86.40% and a fifth place.