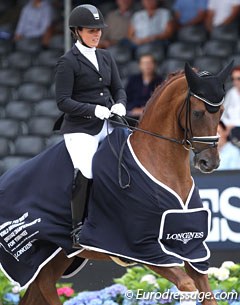 On the third day of competition at the 2016 World Championships for Young Dressage Horsers in Ermelo, the 6-year old Bohemian and the 7-year old Eclectisch became the winners of the consolation finals and qualified for the big finals on Sunday 31 July 2016.

The twenty-seven 6-year-olds that did not place directly for the final had a re-match in the consolation finals on Saturday morning. In this class they competed for the last three tickets for the prestigious final. Danish Katrine Kraglund and the Westfalian bred Bohemian (by Bordeaux x Samarant) redeemed themselves after placing last in the preliminary round. The naughty red-head was not very co-operative in the preliminary round and parked himself in the corner a few times. In the consolation finals, Kraglund and Bohemian had their act together and scored a winning 82.40%

Bohemian outperformed the other Westfalian bred horse, Rock Forever II (by Rockwell x Landstreicher). Bohemian received an 8.4 for his trot and 8.3 for his perspective, his highest mark was an 8.7 for the walk, but this was bested by Rock Forever II. The Rockwell-gelding was presented by Ann-Kathrin Wilting and obtained a 8.9 for this gait. However, he in turn had to give in on the trot and this resulted in a second place with 82.20%.

Under Swedish Yvonne Österholm, the Swedish warmbmood mare Fiera Girl (by Faustinus x Rubinrot) claimed the much-desired last ticket for the final with 80.80%. 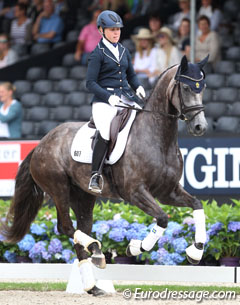 Chairman of the judges Maria Colliander says to be satisfied with the outcome. “We are convinced that we really found the three horses that deserve a place in the final the most. I was especially impressed by the winner Bohemian. Yesterday we had to mark his submission with a three, probably the lowest grade I have ever given at this competition. Today, his rider Katrina Kraglund seemed determined to turn it around. The pair now scored 4.5 points more. The most notable of Rock Forever II is probably his incredible walk and good canter. Number 3, Fiera Girl, we liked because of her even quality. She was more or less good in every aspect.”

Swedisch Ida-Linn Lundholm rode her Dutch warmblood  Eclectisch (by Zenon x Olivia) to a winning 76.178%. The dark bay is an amazing horse with a beautiful front. He was followed by Eastpoint (by Westpoint) and Dutch rider Lynne Maas. The happy Eastpoint showed a pleasant test in which the canter formed the highlight. The end result was 74.744%.

Yvonne Österholm steered the Quarterback-son Quarton to 74.704% and that meant the last ticket for the final was awarded to this gelding.

Chairman of the judges Dr. Dietrich Plewa was convinced that this top three is the right selection to add to the final. “With respect to their level and what they have showed today, they belong to the best seven-year-olds. In my opinion, they even have a good chance to compete with the top. I expect that we will see dressage sport of the highest level tomorrow. Partially because these horses, which are still quite young, have gotten used to the surroundings by now and therefore can show their potential even more than in the qualification, where some still displayed some tension.”

Twofold world champion Sezuan and Dorothee Schneider are the ultimate favourite for the victory. “That horse has so much potential by nature, but it is still a young horse and that means that a few technical mistakes can be decisive. I am convinced that also the remaining horses have a good shot at improving their performance compared to their qualification. So who knows, maybe they will surprise us tomorrow! I expect an exciting final.”

Eurodressage is on the scene taking photos. If you are interested in
ordering prints or digital files for Facebook/instagram, please send us your name and we will mail you the proofs of the photos for you to choose from.