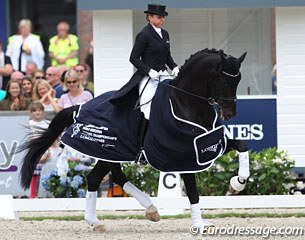 A sensational Sezuan took out the preliminary test in the inaugural 7-year old division at the 2016 World Championships for Young Dressage Horses in Ermelo, The Netherlands, on Friday 29 July 2016. Under German Dorothee Schneider the double World Young Horse Champion proved that he has made a more than successful transition to FEI level.

Schneider and Arlette Jasper-Kohl's Danish warmblood licensed stallion Sezuan (by Zack x Don Schufro) was in command of the S-level preliminary test for 7-year olds, showing very smooth, controlled trot extensions. The half passes were elastic though the one to the right could have had a bit more crossing of the legs. The collected walk could have been a tiny bit more collected and it appeared slightly short-long behind, but the extended walk had huge overtrack and was very clear in the rhythm. The black stallion excelled the most in canter. The horse is super strong behind, sits well in the half pirouettes and produces very big flying changes, even though he anticipated the first change in the four tempi's. Althought the extended canter was ground covering and uphill, the stallion could still be more balanced on the hindlegs throughout, but this will hopefully come with age. Whereas the majority of riders seemed eager to present their horses in the double bridle, Schneider rode her breeding stallion in a snaffle and had him light in the bridle and responsive to the aids. 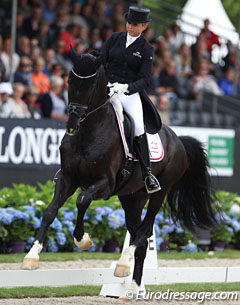 Sezuan's world class made him stand far apart from the rest. This is the first year that an official 7-year old Championship is being held by the FEI and the quality of horses of presented in Ermelo varied a bit too much. There were few highlights, several very interesting and talented horses that sitll appeared too green and others that better stayed home and practised a bit more, in all honesty. Sezuan scored 9.3 for trot, 8.0 for walk, and 10 for canter. With a 9.5 for submission the score came to to a magnificent total of 95.200%. The technical score of 81.64% meant an average of 88.420%.

German Dr. Dietrich Plewa, who was head judge for the class, commented that, “Sezuan was in top shape today. Of course he possesses lots of talent, great movements and a very good canter by nature. However, today also the technical aspect of his test was perfectly executed, and this is remarkable for a horse of only seven years old. Furthermore, he performed all the figures with lots of expression and without any pressure. That’s exactly what we want to see.” 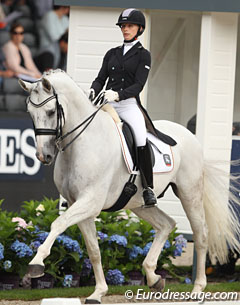 German Iris Knoll and the World Championships alumni  FBW Fairplay H (by Fürst Hohenstein x Disco Tänzer) placed second with 77.619%. The grey Baden Wurttemberger bred gelding appeared very solid and confirmed in the S-level work. He was fluent in the trot movements and looked established in the canter work despite a difficult flying change. The collected walk was poor though, yet his extended walk was outstanding. At all times the horse was soft and light in the contact, but sometimes dropped a bit behind the vertical. The pair scored 7.8 for walk, 8.3 for trot, 9 for canter and 8.5 for submission and perspective.

"FBW Fairplay H stood out in the way he executed primarily the canter figures. Everything seemed to go easy and effortless. He was very focused on his rider," said judge Plewa. 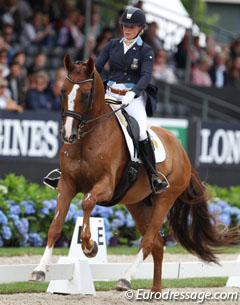 Swedish Grand Prix rider Jeanna Hogberg landed third place aboard the Swedish warmblood Fiorucci HT (by Florencio x Rubinrot). The chestnut gelding is not the flashiest mover in trot. He could be more supple and elastic in his limbs overall, but he was a testimony of good training. The horse executed nice half pirouettes and showed overall good collection in the canter work. The halts were not immobile and the extended walk needed more overstep to truly impress, but the duo produced a very clean and correct ride.  They scored 8.5 for trot, submission and perspective and totalled 77.619%.

“This pair is 100% on the right track training-wise. This horse is always focused on his rider, wants to do his best and Jeanna rides him with the needed ‘fingerspitzengefühl’: this way she brings out the best in her horse," Plewa commented. 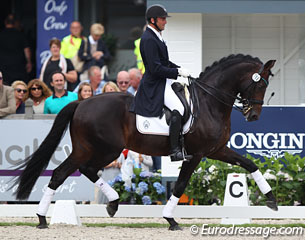 The judges were satisfied with the quality of the 7-year-old horses that are competing at this championship for the first time. “The discrepancies between the horses that are low in the rankings and the top horses was quite big. However especially the top half of the rankings entailed lots of quality.”

The best 12 horses of the preliminary test will return for the final on Sunday. The three top ranking pairs of the consolation finals on Saturday will be allowed to compete in the Sunday finals as well.