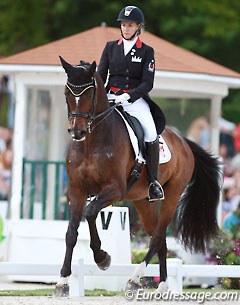 Canadian Olympic candidate Karen Pavicic has filed and lost her appeal with the Sports Dispute Resolution Centre for Canada (SRDCC) on her beliefs that the Canadian Olympic selection was not done fairly because of judging bias. She has now requested an investigation from the FEI.

Canada has nominated Belinda Trussell and Megan Lane as their two individual representatives for the 2016 Olympic Games in Rio. The selection was based on average scores this 2016 show season. Trussell had the highest average score, Lane the second highest and Pavicic the third highest.

Lane's Cedar Valley scores pushed her up into second place for Rio and made Pavicic drop to third. In a final attempt, Pavicic flew her horse from the west coast of Canada to Fritzens, Austria, where the last CDI took place before the Canadian Olympic deadline. Pavicic was unable to improve her score average.

After the team announcement, Pavicic filed an appeal with the Sports Dispute Resolution Centre for Canada (SRDCC)  and had a hearing with the tribunal of the Canadian Equestrian federation. However, the appeal did not rule in her favour.

The FEI Dressage Committee had a conference call on 15 July 2016 regarding the results from CDI Cedar Valley and Elizabeth McMullen’s judging there. Following an analysis of the scoring and a review of the reports and the facts, the DC unanimously recommended that the original results shall stand as there is insufficient grounds for either annulling or changing the results.

Karen is not filing an appeal with the FEI, but has requested an investigation for judging bias and unethical behaviour of an official.

Pavicic bases her request for an investigation on a statement that judge McMullen made to 4* judge Lorraine McDonald, which said that “I marked those two (Lane and Von Martels) up to knock Karen Pavicic out, as I don’t like her horse’s contact and do NOT want her going to Rio." The rider also claims to have evidence that McMullen advised judge Brenda Minor that she would be scoring a horse/rider combination “High".

The FEI is currently investigating the matter before making a decision.

"This matter was put on the agenda in order for FEI headquarters to provide the FEI Dressage Committee with an update on the current situation in relation to this matter. As communicated to Equestrian Canada, and the athlete Karen Pavicic, the FEI Dressage Committee decided on 15 July 2016, based on the available evidence and judging analysis, that the results of the CDI3* Cedar Valley will stand. The Committee also tasked FEI headquarters to follow up on this matter in a fair and thorough manner, looking into any remaining allegations. This follow up is currently ongoing, with due process being followed," an FEI spokesperson told Eurodressage.