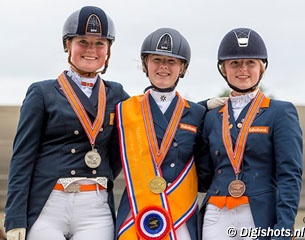 This year's Dutch Dressage Championships were remarkably scheduled during the 2016 CDIO Aachen, the most prestigious dressage event in the world, as well as one week before the 2016 European Junior and Young Riders Championships. The Dutch Nationals counted as second of two observation trials for Dutch team selection for the 2016 Rio Olympic Games so the Grand Prix riders came out in full force, but in the youth divisions some of Holland's best riders were missing as they were in preparation of their departure to Oliva Nova in Spain.

"In the first test I had a real wow-feeling. I never have that because I'm always very critical, but now I was riding with a smile on my face," said Oudhof. In the freestyle the horse was a bit more tense but he still went "really well. Colt was on my aids and he thought it was fantastic in the main arena. I never expected this (the gold medal). You can equally go wrong. I know we had it in us and it came out at right time, which is today when everything worked." 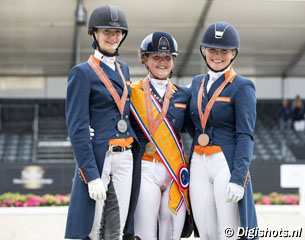 In the Young Riders category, Dutch team rider Jeanine Nieuwenhuis decided to stay home longer before heading to Spain in order to secure the national title first. With Tim Coomans' Athene (by United x Jazz) she was a league of her own and scored 74.237% in the team test and 75.375% in the Kur for gold (149.612 points). Thalia Rockx, who is the Dutch team reserve, got silver aboard her father Johan's Grand Prix horse Verdi de la Fazenda (by Florett As x Sandro Hit). The pair scored 69.026% and 71.000% to total 140.026 points. Lotte Meulendijks saddled her second horse Parole (by Pasolongo x Rosso di Sera) for the Nationals and won bronze with 68.079% and 71.675% (139.754 points).

"I'm so happy. Each victory is special. This is my last year in young riders so I didn't want to miss this competition," said Nieuwenhuis. "Athene is super fit, otherwise this couldn't have happened. You can't get me more fanatic than by letting me ride a competition. You ride differently at shows than at home and this is a good warming up for the European Championships. Of course they are close together but it fits in my preparation." 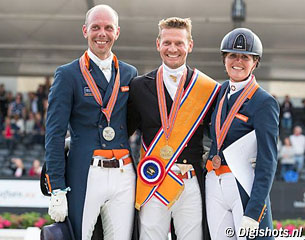 "Zonik performed nicely at the Championships," said Gal after winning the champion's sash. "He went very well and it all gets more confirmed for him. During the selection trials he was still very distracted. You have to go directly in the ring there. Here Zonik spent a few days in the stalls, which gives him rest. The future is promising, he has all the capabilities." 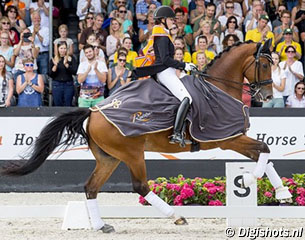 "This is so cool. I never expected it but worked hard for it," said Meulendijks. "Avanti is such a dream horse. That it worked after his holiday after the European Under 25 Championships proves his top character." 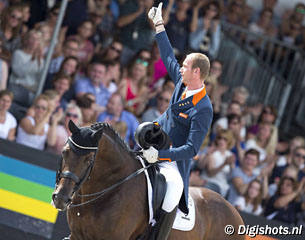 Edward Gal withdraw his top horse Undercover right before the show as the horse is still uncomfortable in show environments. Gal did bring his second ride Voice (by De Niro) to Ermelo to win the Grand Prix test. The Nationals were the second Dutch Olympic observation trials and Gal had to prove form on Voice as the black stallion has been injured this spring and hadn't competed since the CDI-W Amsterdam in January. In agreement with team trainer Johan Rockx, Gal and Voice did not show in the freestyle in order to save the horse for Rio.