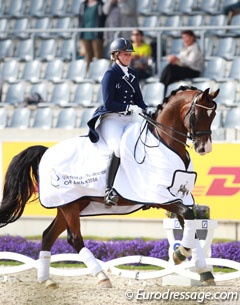 Six year after Belgian Julie de Deken won the inaugural Under 25 tour at the CDIO Aachen, Belgian Laurence Roos claimed the Kur to Music victory in the U25 division at the 2016 CDIO Aachen ahead of the Germans, whose team recently won gold at the 2016 European Under 25 Championships. Laurence Roos and her Belgian warmblood Fil Rouge scored 74.550% for the trophy.

The 22-year old Laurence Roos, who recently graduated as a dentist from college, had a successful weekend in Aachen. Aboard her 11-year-old gelding Fil Rouge (by Stedinger x Argentinus) she was second in the Short Grand Prix and first in the Kur.

The winner of the Grand Prix, Juan Matute Guimon from Spain, finished second with Christina Danguillecourt's German bred Quantico (by Fighting Fit) on a score of 73.60%. 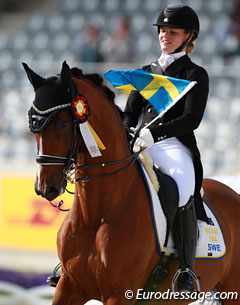 The Swedish rider Lina Dolk made a huge leap forwards with Biggles (by Briar). After placing 14th in the Grand Prix, she finished third in the freestyle with 73.20%. The 18-year-old gelding is well-known in dressage circles. Under Jan Brink Biggles made his Aachen debut in 2005. Dolk's trainer Kristian von Krusenstierna took over the ride and competed the bay Briar x Krevad offspring at several major international shows. In January 2016 he gave the ride on Biggles to his student.

Florine Kienbaum, who was a double silver medalist at the 2016 European Under 25 Championships in June, finished third in the Grand Prix and became the best German rider in the Kur. She placed fourth with 71.875% on with Doktor Schiwago (by Don Frederico).