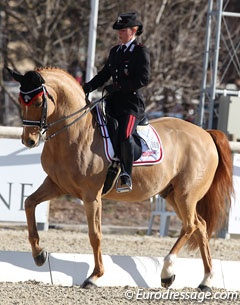 Italy had only short-listed two riders in the running for Olympic nomination: Valentina Truppa and Micol Rustignoli who are both trained by 5* judge and coach Enzo Truppa.

Valentina Truppa has now officially been selected to go to Rio. She will be taking her 19-year old Danish warmblood Chablis, who is bred by Danish Grand Prix rider Morten Thomsen and is sired by Castro x Leonardo II.