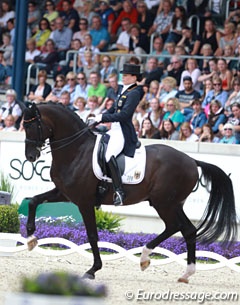 In the German showdown at the 2016 CDIO Aachen Kristina Bröring-Sprehe moved back on top of the board winning the Grand Prix Special on Saturday 16 July 2016. This year's Aachen edition is a battle for supremacy amongst the German Rio Olympic team riders. While Werth and Weihegold looked supreme in the Grand Prix taking over the sceptre from Sprehe, in the Special the cards were redealt and the tables were turned. Sprehe became the number one today, followed by Schneider in second place and Werth third.

After placing her second in the Grand Prix, the GP Special panel of judges -- consisting of Holler, de Wolff, Alonso, Rockwell and Clarke -- floated the top scores once again and put Sprehe and Desperados first. The duo is in very good form but not yet peaking to perfection. There were a few mistakes in her ride (both tempi lines and an unscripted change at entry) and the passage was not entirely regular. The trot half passes, however, were world class, the extensions ground covering, the piaffes on the spot, and the bending was much better as Desperados stayed nicely up in the bridle. They scored 83.725% for victory with 79.412% as low score and a baffling 88.333% as high score. 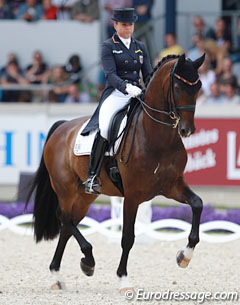 "We changed his feeding and I think he gives a very good impression now," Bröring-Sprehe said about the improved athletic look of her horse. "He has built up a bit more muscle and just feels really good."

Dorothee Schneider and Showtime were on best form. The Hanoverian was more open in the throatlatch even though he could stretch more into the contact overall. Unfortunately there was one mistake in the one tempi changes, but Showtime executed beautiful half passes, exceptional passage work, which is as regular as a metronome, even though the hind legs could move more towards the point of gravity. The extended walk has much overstep but the gelding gets a bit prancy in it. In the first piaffe he was still searching for the rhythm but the second one was better. The two tempi's were outstanding but the pirouettes could have had more bending on both sides. They scored 81.902% for second place with 79.902% as low score and 83.431% as high score.

"He trusts me more and more. He has never been in a stadium like that before," Schneider explained at the press conference. "But it is as though he asks me when he is insecure: ‘Can I do this?’ And I tell him, ‘Yes, you can!’ and then he does it.” 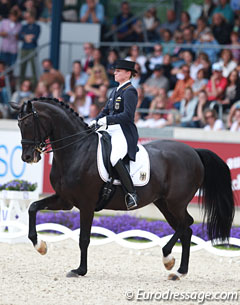 Isabell Werth and Weihegold were strong today, showing improved chewing on the bit, but the pair struggled with the rhythm in two piaffes today and there was a mistake in the two tempi changes. The mare looked very focused on her rider and got a bit over eager in the first trot extension, in which she lost the rhythm. The half passes were fluent. In passage the black mare is snappy, off the ground and very elegant. The mare achieves her maximum overstep of two hooves in the extended walk. In the collected walk before the piaffe she became lateral, but she still earned an average og 7.2 for that walk. The final centerline was excellent. They scored 80.686% for third place with 78.333% as low mark and 82.647% as high score.

“I did something different than usual in the preparation and that unsettled Weihegold a bit," Werth said about the issues in the piaffe. "But it is important that things like that happen, so we can learn from them!” 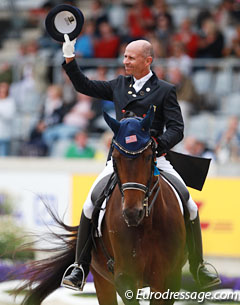 American Steffen Peters recaptured fourth place aboard Legolas. The Westfalian gelding looked more elastic today which resulted in better trot half passes, but in his very bouncy and engaged passage he often was more active with the left hind leg despite the pretty silhouette. The trot extensions were flat though, but the extended walk had very nice overstep and relaxation. The piaffes were lovely, especially the second one was a highlight. In the two tempi changes the horse swayed to the left and one change in each one tempi line was short. Peters rode a wonderful final centerline and posted a score of 76.627% with 73.039% as low score and 78.725% as high score.

Peters was very pleased with the maturity Legolas displayed in the Special. "The first huge relief was when we came in, the announcer said a few things about Legolas, and he did not react whatsoever and that is the exact reason why we were here. I still felt like at Rotterdam, in the Grand Prix, that we were still a little on edge during the first minute of our test, but now he has proven that he can deliver for the team and this is exactly what the plan was. He did the piaffe movements very nicely, as well as his changes, and did beautiful canter pirouettes. Thursday and today the judges gave him a really high mark for his collected walk and that is a gigantic accomplishment. It’s those little things that most people who don’t know Legolas that well don’t appreciate, but I am just stocked about those tiny little things." 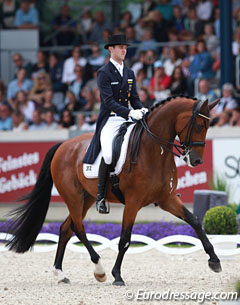 German Sönke Rothenberger and his intergallactic star Cosmo proved that after the cheeky refusal and buck in the Grand Prix, they are a pair the team can rely on. They began their test at top level with fantastic trot extensions and passage work. The transitions were smooth and effortless. In the trot half passes the horse should generate more suspension but he crossed the legs well. The extended walk was good, in the collected the horse got a bit tense. The canter half passes were a highlight but unfortunately there were mistakes in both the two and one tempi line. In the right pirouette Sönke lost some bending, but the nine one tempi's that followed were outstanding. The left pirouette was good. The 21-year old former young rider finished his ride with a very focused and well regulated final centerline. The pair was scoring above 80% until the mistakes in the changes happened. They finished on a score of 76.412% with 72.843% as low score and 81.765% as high score.

"Cosmo was a little flat in canter and the mistakes resulted from that," Rothenberger explained.