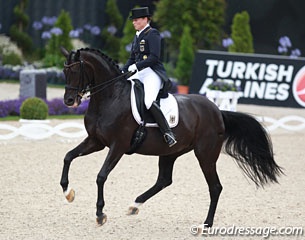 Isabell Werth and the Oldenburg mare Weihegold became the winners of the 5* Nations' Cup Grand Prix at the 2016 CDIO Aachen on Thursday afternoon 14 July 2016. Kristina Bröring-Sprehe involuntarily might have passed on the septre as Germany's ruling dressage dame to Werth, and although three Germans scored over 80% in the 5* Grand Prix, the class was lacklustre due to the absence of the best Dutch, British, Spanish and Swedish dressage riders.

The Dutch equestrian federation remarkably decided to organize its National Championships (and final Rio observation trial) on the same weekend as the CDIO Aachen so not a single Dutch rider got entered. The Brits strategically avoid a showdown in Germany and opted for a home turf CDI in Hartpury void of any competition as dress rehearsal. Other top 15 horses, such as the best Swedish (Don Auriello, Deja), French (Don Luis) and Spanish mounts (Delgado), are all missing Aachen this year. The CDIO Aachen has turned out to be a fitness-and-form check for the German Olympic team candidates, as well as a last chance of pre-Rio exposure to the Olympic ground jury, which is officiating in Aachen.

In Aachen judges Maribel Alonso, Peter Holler, Gary Rockwell, Stephen Clarke, Susanne Baarup, Thomas Lang and Eddy de Wolff van Westerrode were on post to assess the riders. Aachen put seven judges in the ring, following a true championship format, as otherwise five judges work the class. They were amenable to promote the German party as the Germans easily stood out from the rest with their high quality horses and riding. 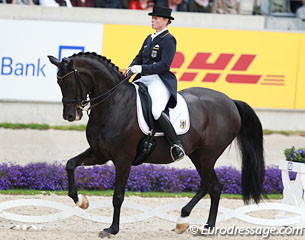 Isabell Werth and Christine Arns-Krogman's 11-year old Oldenburg mare Weihegold (by Don Schufro  x Sandro Hit) won the class, placing first with six out of seven judges. The black mare is not the most spectacular mover in trot with a flat front leg, but is very willing to do an excellent job. The halt at entry was square but stretched, the half passes were balanced and the trot extensions had the nose nicely in front of the vertical. The transition to the first passage was a bit abrupt, but the passage itself was bouncy, elastic and quick; a highlight! The extended walk had good relaxation but the mare became lateral in the collected walk after C. In the second piaffe Weihegold slightly lost the rhythm as she snorted and also lost some regularity in passage because of it; the strike-off to canter was mediocre. The extended canter was strong, the zig zag very well ridden but could achieve more ground cover and uphill tendency. The mare has a nice silhouette in the tempi changes but the ones need to cover more ground. There was a slight loss of impulsion in the left pirouette, the right one was tiny. The final centerline was expressive. In the last piaffe Weihegold could have moved the hindlegs a bit more under the body. The passage was lovely. Throughout the test, the mare bares her teeth and shows an open mouth with little foam, even though the contact is not strong.

Werth impresses in the way she continues to produce world class horses one after the other, unparallelled by any rider in the dressage world. The judges were very eager to reward Werth's newest sensation and posted the generous score of 83.271% on the board. Isabell's low score was 81.100% and her high score 85.200%. 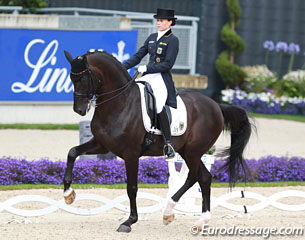 Germany's former number one Kristina Bröring-Sprehe is facing more competition from her compatriots this year and a victory is no longer an automatism. She won two silver medals at the 2016 German Championships and also in Aachen landed second place aboard her wonderful 15-year old Hanoverian stallion Desperados (by De Niro x Wolkenstein II). The black stallion looked fit and fresh, focused on his rider, but the spur discoloration on his coat was an eye mote, even though Sprehe did not display any spur use in the test at all. She stayed still and relaxed in the saddle. The pair began with a very good entry, following by big sweeping trot extensions. In the half pass to the right there was too much hindquarter, the left one was better. The trot work was very elegant overall and the horse stayed nicely up in the bridle, accepting the bit with the proper amount of chewing and foaming. The first passage was a bit uneven with the right hind and the horse was consistently bent to the left in all the passage work. The extended walk was strong, but in the collected there was a slight loss of clarity in the rhythm. The second piaffe-passage was excellent. In the two tempi changes the stallion swung with the hindquarters, but the ones were outstanding and uphill. In the zig zag the horse again had the hindquarters first in the half pass to the right. The pirouettes were tiny and the final line was flowing and expressive. Sprehe scored 82.314% with 80.300% as low score and 85.600% as high score. 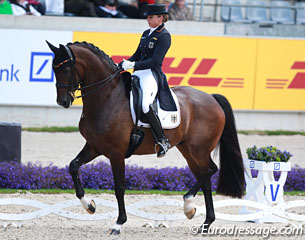 Dorothee Schneider completed a German tri-colour top three by finished third aboard the 10-year old Hanoverain gelding Showtime (by Sandro Hit x Rotspon). The dark bay gelding is a very appealing horse with dynamic, engaged movements, but throughout the test he was too tight in the neck and could have shown more stretch in the frame in the extended work. The contact was lovely though -- soft and steady -- with a horse happily chewing the bit. Showtime was not entirely immobile in the halt at entry (interesting to see what the judges do with that! Marks from 6.0 to 8.0), and the left half pass was more supple than the right one. The passage is the highlight movement of this horse. He showed much elasticity and lightfootedness in it. The first piaffe was quite economical in the amount of steps and the horse got a bit deep, the second piaffe was nice with good sit, even though the transitions in and out of piaffe need to be more fluent. The extended canter had much power, but no lengthening in the frame. There was a big mistake in the two tempi changes, but the ones were correct even though the horse needs to develop more ground cover. The left pirouette was a bit counter bent, the right one was the best one. The final line was expressive. Schneider's score of 80.700% was a bit on the high side considering the mistake and the lack of lengthening in the frame. Her low score was 78.900%, the high mark 84.200%. 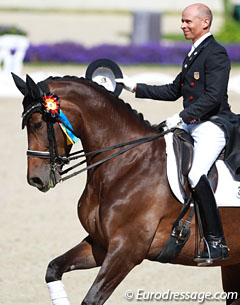 Steffen Peters spoilt a total German party by moving into fourth place with his 14-year old Westfalian gelding Legolas (by Laomedon x Florestan II). The bay gelding always give a bit of both worlds in a dressage test.  The piaffe and passage work are impressive with its bounce and scope and the two movements always score the big points, but in the extensions Legolas fails to impress. Het gets quick in the rhythm and stiff in the topline. There was a small mistake in the rhythm in the first trot diagonal. The cadence in the half passes was good, but the horse was not supple. The passage was very expressive but not always even with the left hind leg showing more activity and lift. The walk was well ridden, especially the collected which had a clear 4-beat rhythm. The second piaffe was very nicely on the spot. There was a hesitation in the strike off to canter due to a loss of impulsion. The tempi changes were correct but in the two's the horse needs to be straighter in the body. The pirouettes were small. The final line was bouncy, but not always totally regular, the transitions were smooth though. It must be admitted that Peters' score of 77.243% was benevolent considering Legolas' lack of elasticity, even though Steffen presented a horse steady in the contact and focused on the rider. The individual scores ranged from 76.200 to 79.700%. 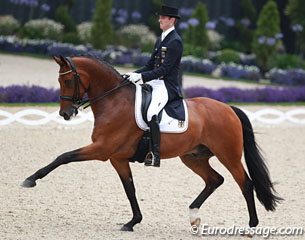 The most thrilling ride of the day came from the 21-year old Sönke Rothenberger on his 9-year old show jumping bred Dutch warmblood Cosmo (by Van Gogh x Landjonker). The bright bay gelding is one of the most gifted movers in the world and Rothenberger really presented the horse in the best frame he has ever shown him so far. Cosmo is a highly sensitive horse, spooky and playful, but Sönke managed this very well. Still, the horse's mental immaturity popped up in the test and definitely ruined the chances to achieve a personal best score. The pair began their test at world class level with a very beautiful, elastic and focused trot tour in which the extensions were text book. The rider could have been a tad more quiet with the hands even though the contact is light. The first piaffe was a bit too forward and wide behind, but the passage was buoyant and regular. The collected walk was tense but stayed clear in the rhythm. Cosmo crept a bit forward in the second piaffe as he tends to back step with the right hind when kept on the spot. On the diagonal for the two tempi's, the temperamental gelding refused, halted, kicked the spur and made a mini buck. Sönke remained cool as a cucumber though and still rode a few more tempi changes at the end of the line. In the zig zag Cosmo made an unscripted early change, which pushed the score down even further. The one tempi changes were outstanding. The passage on the centerline was excellent with its regularlity, but the piaffe at x was still slightly hesitant. The pair scored 75.600% with a low stor of 72.700% and a high score of 78.100%. 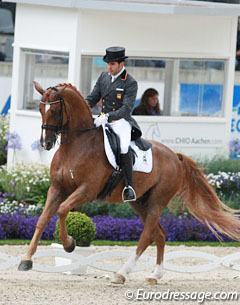 Spanish Severo Jurado Lopez and Kirsten and Jorn Elkjaer-Holm's 10-year old Lorenzo (by Lord Loxley x Rubin Royal) placed sixth. The sympathetic but big chestnut gelding showed sweeping half passes and powerful trot extensions. He achieves much air time in passage, but could be more closed in the frame with the hindleg moving under. In the piaffe he gets a bit wide and on the forehand. The one tempi changes were stunning, in the two's there was much tail swoosh going on. They scored 74.357%.

The best Danish combination entered for the 2016 CDIO Aachen experienced disappointment in the Grand Prix. After winning the 2016 Danish Championships with a 79% Grand Prix score, Cathrine Dufour and Atterupgaards Cassidy (by Caprimond x Donnerhall) were unable to achieve such a ride. The chestnut gelding, who is known to be a ball of hotness, could not keep the lid on the cooker and was just too hot to trot. There was no immobility in the halts, he jogged in the collected walk, the second piaffe-passage was executed under high current, there were mistakes in the two tempi changes and he jumped out of the right pirouette. Still it was obvious that all the potential for greatness was there: strong trot extensions, elegant and lightfooted passage work, lovely one tempi changes,... They finished 19th with still 71.00%. Her marks ranged from 64.800% to 72.900% ! 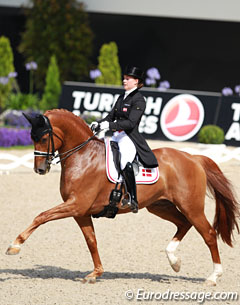 The 5* Grand Prix riders had to deal with rain showers throughout the day and because of the absence of many top riders, the electric atmosphere and excitement were not really to be found in the stadium on Thursday. Better weather is expected on Saturday for the Grand Prix Special and the riders will certainly put their best foot forward to impress the judges and crowds again. We'll be there!