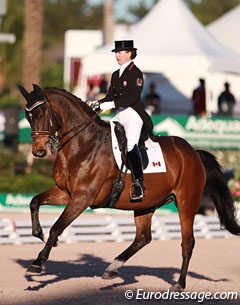 On Thursday, the Canadian Olympic Committee (COC) and Equestrian Canada (EC) named the two athletes nominated to represent Canada in equestrian dressage at the Rio 2016 Olympic Games from 10 - 15 August 2016.

The Canadian Olympic selection process has been shrouded in mystery as the federation hardly communicated its selection criterium (four scores) nor posted provisional standings throughout the season. Furthermore, reports of unfair judging at the last Canadian based CDI in Cedar Valley have been made, which hasve meddled with the appearance of fairness in the selection tract.

Canada did not earn a team berth, spots for two individuals were secured through qualification criteria set by FEI.

The Canadian Equestrian Team’s final preparations for Rio over the next few weeks will include training camps in Florida and Germany.

Canada will be represented in dressage by:

Karen Pavicic and her own and Jayne Essig's Don Daiquiri have been named the reserve pair.

“It is an honour to be chosen to represent Canada at the Rio 2016 Olympic Games," said Belinda Trussell. "These Olympics are so special to me because four years ago my dreams
were shattered when my horse Anton had a major injury that took us out
of the running for the London 2012 Games. Little did I know he would
recover so well and earn a place on the Rio Olympic Team with personal
best scores. I could not have accomplished this goal without my amazing
family, team and coach. Thank you to Equestrian Canada for all the
support and huge organizational challenges getting us all to Rio safely.
I will wear the maple leaf proudly in Rio!!”