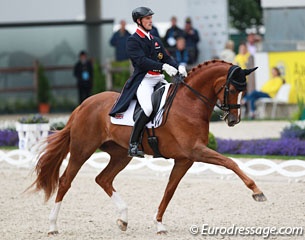 The 2016 CDIO Aachen, the most impressive, thrilling and well organized horse show in the world, kicked off on Wednesday 13 July 2016 with the Prix St Georges held on a chilly afternoon. British duo Michael Eilberg and Woodlander Farouche aced the class with a strong 76.368%, edging out German pro's Dorothee Schneider and Isabell Werth.

Eilberg and the now 10-year old double world young horse champion Woodlander Farouche (by Furst Heinrich x Dimaggio) showed beautiful dressage in motion. The sympathetic chestnut mare is not the strongest mover behind but she was very obedient, soft and consistent in the bridle and very impressive in the trot extensions. A small bobble in the left pirouette pushed the score down a bit. The panel of judges, consisting of Alonso, Stukelj, Fransen-Iacobaeus, Nivelle and Lang, rewarded the mare with 76.368%. The individual marks ranged from 73.816% to 79.079%.

Dorothee Schneider and her 9-year old Hanoverian Santiago (by Stedinger x Dacaprio) certainly made talent count in the Prix St Georges. The pair is the 2015 German Developing PSG Champions and has already been competing at Grand Prix level this year. For Aachen they dropped back to the small tour. Santiago is a stunning mover with tremendous scope, bounce and ground cover. The big bay, however, was tense throughout the test, which clearly showed in the walk, but the judges assessed the quality of the potential of the horse and ranked the pair second with 75.263%. Schneider's scores ranged from 72.368% to 78.026% 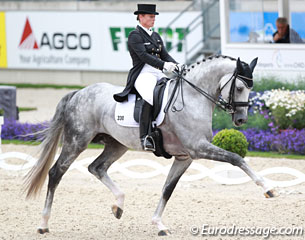 Isabell Werth has taken over the ride on the 7-year old German Sport Horse stallion Belantis (by Benetton Dream x Expose) from her assistent trainer Beatrice Buchwald. The grey stallion is such a sympathetic, supple mover with lots of swing through the body. His inexperience at small tour level clearly showed though. In trot the horse had difficulties keeping a solid, consistent stride length and needs to improve his self carriage and balance. The rider had to swing much in the saddle to produce the tempi changes, which were more laboured to the right than left. Nevertheless, Belantis is a true star for the future and showed strong ground cover in the trot extension and good relaxation and lengthening in the extended walk. They scored 73.895% with marks going from 71.842% to 75.263%.

Hubertus Schmidt and the 7-year old Escolar (by Estobar x Furst Piccolo) revealed the same inexperience. The massive, young bay stallion still needs to improve considerably on his self carriage and needs more strength in his top line muscles, but his canter work is major and the horse has much scope in trot. They got 73.026%. 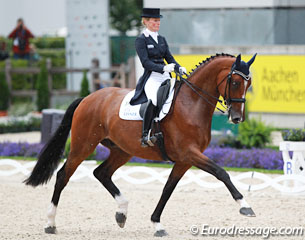 Helen Langehanenberg presented the 8-year old Dutch warmblood Suppenkasper (by Spielberg x Krack C), which is owned by her husband, veterinarian David Lichtenberg. The tall bay is a very talented mover with super bounce and uphill tendency, especially in canter. They were fith with 72.921%

The prettiest, most harmonious ride came from Ingrid Klimke on the 8-year old Rhinelander mare Geraldine (by Furst Grandios x Tolstoi). they chestnut mare is interestingly owned by German Ulrich Zeising in partnership with Canadian Faith Berghuis. Klimke had the prettiest contact with the bridle and the mare looked happy to do her job. She could have been a bit more off the forehand in trot, but Geraldine was always rhythmical and swinging. The walk and canter pirouettes were still a bit of an issue and also in the canter half passes the pair lost some points. They were sixth with 71.553%.