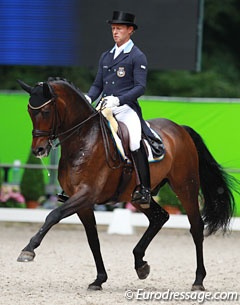 Three Swedish Olympic short listed riders, Mads Hendeliowitz, Rose Mathisen and Emilie Nyrerod, had to go head-to-head at the 2016 CDIO Falsterbo on 8 - 10 July to determine which rider would get the reserve spot on the Swedish team that will travel to Rio for the 2016 Olympic Games.

Team captain Bo Jena and training supervisor Kyra Kyrklund decided on Hendeliowitz with his 12-year old Oldenburg Jimmie Choo (by Sandro Hit x Don Schufro), after the rider won the 3* Grand Prix class in Falsterbo with 73.380%. Nyrerod and Miata, who were on the Swedish team at the 2015 European Championships, were second with 71.480%.  Rose Mathisen and Zuidenwind contested the 5* Grand Prix and scored 71.780% in the Grand Prix.

"If I could, I would send two teams," said Bo Jena after announcing Hendeliowitz as travelling reserve. "We have so many good riders right now.

The Danish born Hendeliowitz became a Swede in 2008. Emilie Nyrerod has been listed as Sweden's non-travelling reserve.