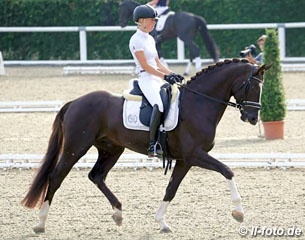 Dutch rider Kirsten Brouwer and the Hanoverian stallion Ferguson have received a wild card from the German Equestrian Federation to participate at the 2016 World Championships for Young Dressage Horses in Ermelo, The Netherlands, on 29 - 31 July 2016.

Brouwer and the 5-year old Hanoverian stallion Ferguson (by Floriscount x Lauries Crusador xx), who is bred in Germany by Erike Lüttjen and owned by Titan Wilaras, were assessed by the German selectors at the two WCYH selection trials held in Warendorf, Germany, on 7 - 8 and 29 June 2016.

On the final selection day in Warendorf on 29 June 2016, Brouwer received the message that she obtained a berth in Ermelo via a wild card.

"Yes, Germany finds Ferguson and me good enough to represent them at the World Championships with a wild card," Brouwer expressed. "Today I rode the final test in Warendorf and he did his very best. In the warm up he was quite stalliony, but in the ring he was super focused. I'm proud of my handsome."