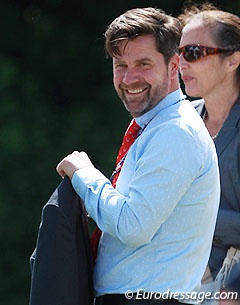 FEI Dressage committee member Hans-Christian Matthiesen is the driving force behind solidifying a format for and instating the 7-year old Championship at the World Young Horse Championships.

The demand for a 7-year old Championship came from riders and spectators alike. The example was set by the Falsterbo International Horse Show in Sweden where each year the "Open Scandinavian Championships" for 7-year olds are being held and considered one of the crowd magnets of the show.

The format for the 7-year old World Championships in Ermelo will be slightly different from Falsterbo, where horses are judged purely on a technical level for their performance in a developing Prix St Georges horse test.

Riders will get an explanation for the individual marks by detailed comments on the test sheet. "Comments after each ride are not compulsory. However, they are recommended in order to make the competition more attractive to the public," Matthiesen added.

Belgium, The Netherlands, Germany, Great Britain, and Sweden are already actively including team selection for 7-year olds in their standard 5 and 6-year old team selection and observation trials.  The first horses selected for Ermelo have already been announced.