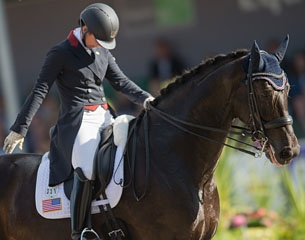 At the 2016 CDIO Rotterdam on Saturday 25 June 2016, two remarkable incidents took place with "potential" blood showing on two American horses. Kasey Perry's Dublet had visible pink foam in the Grand Prix Special, but the judge at C did not ring the bell nor did the steward at the tack check notice anything. Steffen Peters' Rosamunde was stopped at the end of her test for a hoof/leg check, but she had no blood according to the judges and stewards.

Dutch equestrian publication Horses.nl believes that the judges and stewards willingly "closed their eyes" to blood. Eurodressage provides a run-down of what happened in Rotterdam:

Kasey Perry's Danish warmblood Gorklintgards Dublet (by Diamond Hit) started to develop clear pink foam in the canter section of her Grand Prix Special test and by the time of the pirouettes it obviously showed, especially on the right side of the horse's mouth. At the end of the test Perry clearly leaned over to check her horse's mouth multiple times. 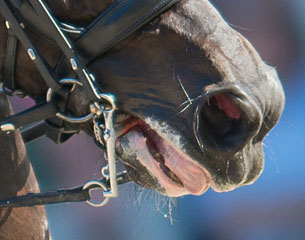 The audience as well as the some judges noticed the blood, but Thomas Lang, the judge at C, appeared to have not seen it. Only the judge at C can ring the bell to stop the test. Yet, if other judges see blood and the judge at C does not, they have the right to leave their judge's box and alert the judge at C. This was not done.  Also at the tack inspection, the steward did not to report any blood.

"If the head judge or the steward do not see blood, there is no blood," Rotterdam dressage director Laurens van Lieren commented at the press conference according to Horses.nl. "There are two persons who can respond in such a case: the head judge and the steward at the tack check at the exit of the stadium. If they don't see blood, there is no blood according to the rules."

The 5* GP Special was judged by Baarup (DEN), de Wolff (NED), Lang (AUT), Saleh (FRA), and Holler (GER). The head judge at C, Thomas Lang, described the situation as following: "I did not ring the bell, because I could not see any blood. The horse showed the tongue on one side, also the lip was slightly rolled up, but for me no blood. Also the Steward checked the horse after the test and everything was ok for him."

Judge Holler told Eurodressage that he had not seen the blood but if a judge not at C did, he should have gone out of his box to report it to the judge at C. Baarup told Eurodressage that she "saw something pink and tried to wave to Thomas and ask him to check it just to be sure. But according to him, he said he didn't see anything. But then it is not so easy to sit on the long side." Saleh stated that he thought he noticed blood, but "when you are not at C you can not go out and check. Then we rely on the decision of the president and the steward." Dutch judge Eddy de Wolff van Westerrode, who sat at H, was at the press conference after the Special according to Horses.nl and acknowledged the same: "the other judges saw it, but we could not react." As there seemed to have been quite some uncertainty amongst the judges whether the horse was bleeding from the mouth or not, no bell was rung but they lay the verdict in the hands of the steward.  "When the test is finished the steward has to check," Saleh explained. "He can be closer and even use a tissue. He (the steward) consider(ed) it wasn't blood and that it was (the colour of) the tongue and the lip."

Kasey Perry-Glass and Dublet finished fifth in the Special with 71.765% and her results counted towards the overall second place of the U.S.A. in the Nations' Cup. The pair is brand new on the scene and Kasey has competed at only her second Grand Prix show outside the U.S.A. She impressed the crowds with her classical riding and super talented horse on her Euro debut in Compiegne, France, where she won the Grand Prix with 77%. In Rotterdam the pair was not as sharp and made a few mistakes, but still blew laymen, dressage lovers and critics away with their potential for the future.

In the Grand Prix Special 3* on Saturday afternoon there was another "scare" involving American Steffen Peters riding Rosamunde. The judge at C, Peter Holler, had to come out of his box at the very end of Rosamunde's performance to inspect the hoof bulb of her left front leg, which appeared pink. 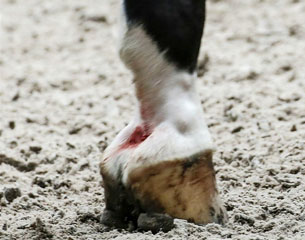 "I had to stop Steffen before leaving the arena to check on this," judge Peter Holler told Eurodressage. "I had a closer look when the horse was standing on all four feet. After this I lifted this leg in order to check with an even better view. I could not see any fresh blood and used my paper tissue to dab the hoof bulb, but could see nothing."

Holler believes it must have been a left over of a healed greasy heel. To be entirely sure and to follow protocol, Rosamunde was also shown to the steward in charge.

"He (the steward) stopped the horse when leaving the ring. He repeated the tissue test and also took a picture. Both showed that there was no fresh blood. Picture and tissue were presented to me as president of the jury in this test and I decided that the horse had been fit to compete and there was no health detriment," Holler explained.