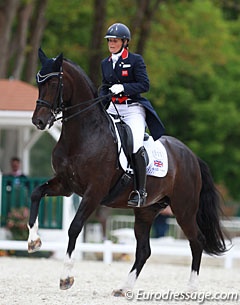 British Dressage, the dressage department of the British Equestrian Federation, has named the team that will represent Great Britain in the 2016 CDIO Aachen Nations' Cup competition on 15 - 17 July 2016.

Aachen will no longer be a British Olympic team selection/observation trial as Great Britain will be announcing its Olympic team on 5 July 2016.

British team selection is primarily based on highest average scores. The team spots for Charlotte Dujardin, Carl Hester and Fiona Bigwood are as good as secured. The fourth team spot is still open, though Spencer Wilton (Super Nova) and Lara Griffith (Rubin al Asad) seem to be the hottest contestants for it.

Representing Great Britain at the CDIO Aachen will be:

Eilberg will also be riding Woodlander Dornroschen in the CDI 4* big tour and Woodlander Farouche in the small tour.