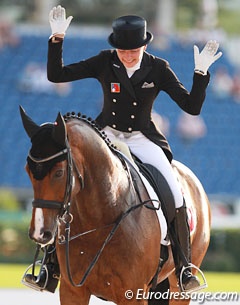 The Ebikon based Marcela will be riding Irine Meyer's 15-year old Danish warmblood Atterupgaards Molberg (by Michellino x Rambo). She obtained Switzerland's individual starting place in Rio by achieving highly consistent scores the past 15 months. She is the country's undisputed number one Grand Prix rider at the moment.

Marcela Krinke-Susmelj has set reaching the kur to music finals as personal goal in Rio.

"I'm enormously thrilled about the selection of Molberg and I for our first Olympic Games. We are both in top form and will do everything to achieve a qualification for the Rio Olympic Games' Kur to Music in which the best 18 riders compete. I'm very thankful to my sponsor and owner of Molberg, Irene Meyer. Only thanks to her great support this has been possible."