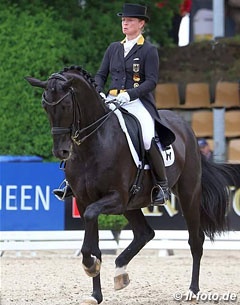 The DOKR dressage selection committee and team trainer Monica Theodorescu announced the team that will represent Germany at the 2016 CDIO Aachen, which is the final Olympic team selection trial for Germany.

Traditionally the German Championships and the CDIO Aachen are the two key team selection events for each year's (inter)continental championship. In Aachen the most likely team that will get selected for the championship always gets a "test ride" in the nations' cup. If all horses stay sound, the team competing in Aachen will also be the one for the Olympic Games in Rio.

The Aachen team is based on the performances of the riders in the Grand Prix and Grand Prix Special at the 2016 German Championships in Balve which are taking place this weekend. Isabell Werth surprisingly won the Special gold medal after beating Germany's ruling number one Kristina Bröring-Sprehe.