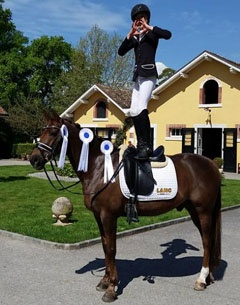 First time venturing out of his home country Germany to an international dressage competition, German Moritz Treffinger and his 18-year old pony gelding No Limit did not have to go very far for their CDI debut at the 2016 CDI Prangins on 5 - 8 May 2016. The pair scored a hattrick and was delighted with their CDI achievements in Switzerland.

“My three wins in Prangins were very special for me because it was not only my first time at an international competition, but during the show my pony was also so concentrated,” said Mortiz who just turned 13 on 31 May. “I was so happy to see that he was as focused as he is every time I ride him at home.”

Winning the Team Championship test with 70.427%, the Individual test with 72.154%, and the Pony Kur with 75.125%, Moritz says that No Limit (by Speyksbosch Nelson x Silverstop's Rondo) is the most confident and reliable pony he could hope for.

“He is just the best pony ever," he stated.

Trained by his mother at their home riding club in Oberderdingen, Germany (near Karlsruhe), Moritz is also completing his  seventh year at a gymnasium.

“My plan for the future is to be on the German squad," said the ambitious young boy. "I also had an 6-year old stallion in work, Habe (by Furst Romancer x Florestan), but we recently sold him because I want to concentrate all my time on my three ponies.”

Treffinger took over the ride on No Limit in 2015. He was previously competed by Paulina Rohr until 2011 and before that Philippa and Carlotta Weil shared the ride on the chestnut schoolmaster. Moritz' two other FEI ponies are the 8-year old Top Queen H (by Top Anthony II x Dark Rubin x Damokles) and the 9-year old grey stallion Dancing Dynamic (by Dior de Luxe x Varello x Nedo II). He also competed a fourth pony this season in Germany, Dideldei (by Don't Worry x Vita Nova's Golden Boris).

Moritz stated this his string of ponies all have a lot of self-confidence, which makes it always a lot of fun to work with them.

“Right now we have not planned any more competitions abroad," he explained. "Our focus at the moment is on the Baden-Württemberg Regional Championships and the German Pony Championships."