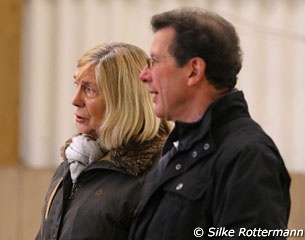 For generations the one and only way to learn how to sit correctly and follow the horse's movements as smoothly as possible has been lunging. There are a few exceptions with children whose first contact with horses often was vaulting, which also fosters balance and coordination. Lunging in turn has been and still is considered something only for "beginners" and in any case requires a suitable horse and a third person who lunges it. It isn't always possible for everybody or at least not always easy to organise, but in the past years a term with corresponding methods has reached the equestrian world: kinematics.

Even though there are different techniques within this approach, in the end they all aim at the same goal: recognise movement problems of riders and give them useful exercises and tools to work on them. In the end a rider can work hard on his horse's balance, but if he isn't balanced and coordinated himself, he will never completely succeed. The conscience that even the advanced rider constantly has to work on himself, grew bigger the past years and kinematics has become part of a top riders' training. 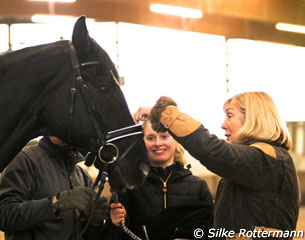 While kinematic training seminars for riders are regularly offered by qualified trainers of different approaches, it rarely ever happens that it is combined with a dressage clinic. That it why Eurodressage decided to visit a seminar in which both parts of a rider's education met. In April Silke Rottermann travelled to the mekka of German racing, Baden-Baden, to see how rider problems were tackled from both sides. The three-day-seminar was held at Baden-Baden Riding Club and conducted by organiser Michael Rohrmann and Angelika Frömming. It included four riders of different training level.

Rohrmann belongs to the first riding instructors in Germany after Eckhard Meyners, who qualified as kinematics trainer in cooperation with the German Riding School in Warendorf in 2008. A very experienced trainer, Rohrmann also competed successfully up to Grand Prix-level in dressage and S-level in jumping and therefore is aware of with what riders struggle, not only from a horse training, but also kinematics' point of view.
Frömming, on the other hand, hasbeen an I-judge and judges' trainer for many years. She has had a classical education which led her  to compete at the highest level in dressage. 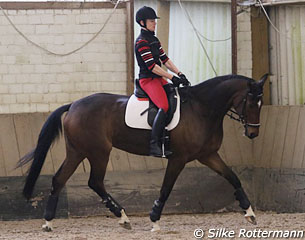 The seminar kicked off with an evaluation of the riders and horses by both clinicians. The riders rode their horses in different gaits and movemebts so Michael Rohrmann and Angelika Frömming could get an impression where both partners had their weak spots on which should be focused during the lessons to come. The riders themselves were asked to speak about their horses, problems and goals. After each exercise they were encouraged to verbalise their impression and feelings which gave also gave the trainers valuable feedback.

"The movements of the rider have a direct, either negative or positive influence on the way his horse moves. So it is important to become aware where are these weak spots and then get efficient tools to daily work on them as a rider. One isn't allowed to forgot that a rider first is a human being with his own balance and as a rider has to adapt to the new challenge," Michael Rohrmann phrased the goal and the way. 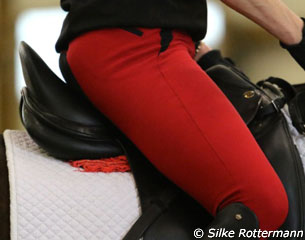 With the first and least experienced of the seminar riders the main problem soon became obvious to the onlookers. It descended from the position of the pelvis and the thoracic spine which was not erect enough. This in turn influenced the whole seat because it hindered the rider to swing with the movements of his horse.

A similar problem turned up later on with another rider who could compensate it, but whose horse was negatively affected. Here a folded towel under the saddle changed the saddle's centre of gravity and could significantly solve the problem for the day as the horse become freer in her gaits. As the saddle problem could of course not been solved on the spot, Mr. Rohrmann still had several tools to work on a better position, first from the ground and then by putting horse and rider on the lunge line.

"For a more elastic and upright seat the pelvis and iliosacral joint form the base and at the same time are a restriction for many riders," Rohrmann stated. To improve it he asked the rider to lay on a gymnastic mat, put his head to one side, the bent legs to the other and breath calmly. The exercise was done several times to both sides. Then the rider had to put his hands around his knees and rock back and forth which should be beneficial to make the spine rounder and more flexible, which in turn helps to swing with the horse while riding. 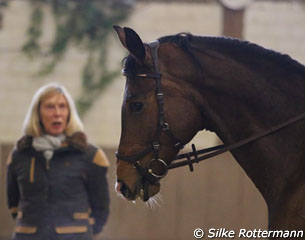 Rohrmann put the rider on the lunge-line to work on a better balance and coordination with the horse's movements through several exercises, amongst them juggling balls! Rohrmann as well as Frömming both stressed throughout the day that nowadays schooling the seat with lunge lessons seems to have gone out of fashion, but only a thorough education at the lunge line sets the foundation for a good seat and even more, maintains it.

"Today it seems to be considered a shame if an advanced rider rides on the lung-line, but when I was still competing and I felt something was going out of order, I asked my partner to take me on the lung line so I could work on it," Angelika Frömming reported. Michael Rohrmann confirmed that by saying,  "sometimes if nowadays one gets a lunge lesson offered, it is conceived like a slap in the face." 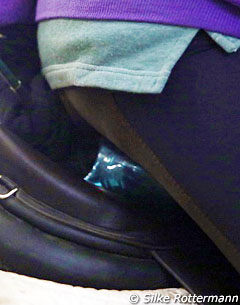 However, something which doesn't require a suitable horse nor a third person, something which is cheap and can easily be integrated in the everyday training, is a small plastic cushion filled with air which alternatively can be filled with water. The cushion was positioned between the saddle and the rider's bum and Rohrmann used this simple yet effective tool with two of the riders who shared one goal: to initiate a more balanced and elastic, natural errect seat. "Steinbrecht wrote 'from the function to form' and not the other way around because it only leads to stiffness and tension," Rohrmann remarked.

The cushion caused the riders to sit far from the horse and caused some instability. To balance themselves the riders really had to errect their upper body and stay strong in the core. This way the riders gained the feeling for the correct position which both managed to maintain after the cushion was removed again. Because they could feel the difference, they felt more stabilized and better balanced than before. It was rather astonishing to see that such a simple tool immediately caused a visible positive effect and one can only guess how influential it could become by using it daily for about ten minutes at the beginning of each session. 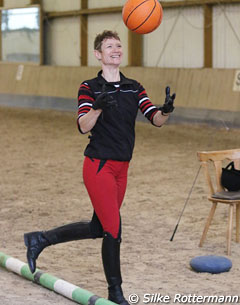 An interesting case was a talented rider who also works as an amateur trainer and currently competes at M-level on her self-trained 7-year-old Württemberger mare. While striving for perfection is characteristic for dressage in particular, it can also become an obsession in a negative way and can hinder riders to enjoy the small steps in their daily training. Because this rider described herself like that, Michael Rohrmann gave her a tricky task before her riding lesson: She should walk forwards-sidewards and backwards-sidewards over a pole on the ground while throwing a ball in the air and humming a melody, all at the same time.
Of course this exercise schooled the coordination, but over all it distracted the rider and that way it made her feel more what she was actually doing than trying to fulfil her goals perfectly.

What might sound a bit strange at first really worked out. When before Frömming had to stress repeatedly "Riding is fun, fun, fun,", the young lady then took it easier and broke into a big smile when her mare showed a flying change with ease. This example showed the importance of a positive attitude. "This attitude and the joy when riding are important as a basis of riding and is unfortunately often lost in training, which only focuses on the techniques," said Rohrmann.

Seminars are meant for people to learn something new or increase existent knowledge. However often riders feel that clinics or seminars are a certain kind of „day-fly“ from which they cannot profit on the long-term. Although no weekend seminar can change a rider overnight, this one gave the riders simple tools which they can use daily from now on and which might make the difference in the long-term. While it is important that riders go home with the feeling of having new tools at hand to use at home, the factor of motivation remains of similar importance. 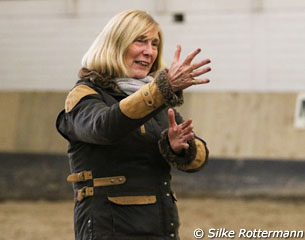 Angelika Frömming impressed the participants - pleasure and competition riders alike - with her youthful temperament, her sense of humour and her sharp eye. She did not miss  one minor detail and corrected it immediately in an encouraging manner. When some renowned trainers of today admit that they do not really know what to do with less experienced riders, Frömming had not the least problem with them because her teaching is strictly orientated at the training scale.  She did not focus on certain movements, but on straightness, impulsion and throughness. Both instructors as well as their students visibly enjoyed the interactions on that cold and rainy April weekend, so that it was decided to continue this successful cooperation with a similar seminar next October.