Major Interest from All over the World for Uthopia 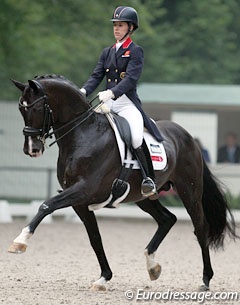 In an interview with Horse & Hound, Aiden Larkin of Wilsons Auctions confirmed that they have been “inundated with enquiries". "The minute Uthopia’s sale was public knowledge, we were inundated with interest from the UK, from France, from Holland — from all regions."

On 28 April 2016 Wilsons Auctions announced that they have been instructed to sell Uthopia by public auction to the highest bidder as part of their Unreserved Prestige Auction on Friday 27 May 2016.

The 15-year old Dutch warmblood stallion Uthopia (by Metall x Inspekteur x Ulft) is being sold by Tom Keenan (Keenan Corporate Finance) and James Neill (HNH Group) who hold joint ownership of the horse by virtue of their respective roles as Trustee in Bankruptcy over two separate bankruptcy estates.

The auction takes place in Northern Ireland, but Uthopia will stay at Carl Hester's yard and not be moved for the sale. The auction will be live at the Wilsons Auctions head office and there will be phone and online bidding for the stallion.

“It’s our job to achieve true market value on an open and fair platform. And for a worldwide horse with worldwide bloodlines there’s also a huge worldwide marketing campaign for him," Larkin told Horse & Hound. “It’s simply that he goes to the highest bidder. The final sale price will be there for the world to see, but the new owner may not wish to reveal themselves."

Uthopia will be sold to the highest bidder without reserve. Carl Hester has announced that he has rallyed a group of sponsors who will be bidding on the horse so that Carl can keep him and retire the stallion at his yard.

Uthopia is an approved breeding stallion for the Dutch warmblood society. He was last competed by Charlotte Dujardin at the 2016 CDI-W Amsterdam in January.