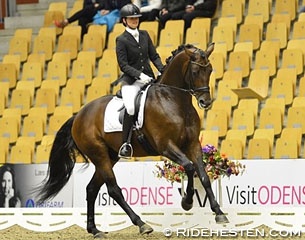 For 2016 the Dutch Equestrian Federation and KWPN society decided on a new selection format. Instead of hosting a series of training events/observation trials, the Dutch selectors will now make their pick through a competition format with three qualifiers (Delft, Kootwijk, Etten-Leur) and a semi-finals in Ermelo.

In the 5-year old division Kim Koolen steered the KWPN licensed stallion Guardian S (by Bodyguard x Trento B) to victory with 83.4 points. The pair bested a field of 18 combinations. Dana van Lierp and the liver chestnut stallion Gunner KS (by Belissimo M) were second with 79.4 points, followed by Jennifer Sekreve on Garmante D (by Contango) with 78.8 points.

For the first time the World Young Horse Championships will also host an official 7-year old division. At the Dutch trial in Kootwijk, the Danish Bettina Jaeger won the 7-year old division on Esperance (by Sorento x Rousseau) with 77.13%. Last October this pair won the 2015 Danish young horse championships in Odense. Theo Hanzon and Eddieni (by Johnson) slotted in second with 76.80% and Vai Bruntink was third on Ebony (by Painted Black) with 76.37%