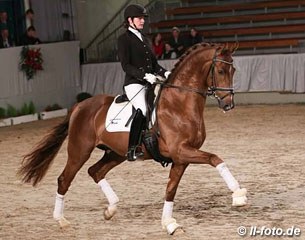 Three more spring stallion performance testings concluded at the end of April with Borsalino winning the first Schlieckau Dressage Sport Testing, while Helium and Ballon d'Or were the winners of the 14-day testing in Schlieckau and Marbach. 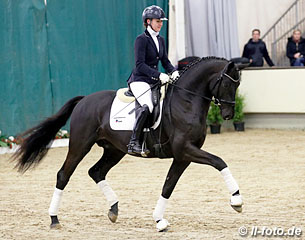 Twenty-five colts participated in the 14-day testing in Schlieckau from 15 - 28 April 2016. The top scoring stallion was the Danish bred Trakehner Helium (by Millennium) with an overal total of 8.58 points. He got 9.25 and 9.0 for character, 8.5 for trot, 8 for canter and 7.5 for walk. With 8.5 for rideability and 8.5 for jumping talent. The guest judge rider gave him 9.25 for rideability.  Destacado (by Desperados) was the runner-up with 8.35 points overall. He achieved the highest dressage score of all (8.68 points).