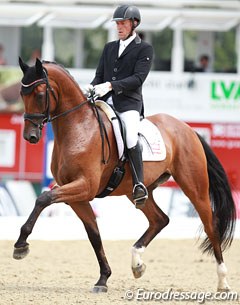 The Danish equestrian federation and Danish breed societies have agreed on a slightly different selection procedure to decide on Danish representation at the 2016 World Championships for Young Dressage Horses in Ermelo, The Netherlands, the last week of July. Because 2016 is an Olympic year the programme for Danish young horse selection has changed.

This one selection trial is in fact held at two locations: The West based trial in Vilhelmsborg on 28 May 2016 and the East based trial in Ringsted on 29 May 2016. Combinations picked at those two trials will be added to the long list and are then invited to an observation day on 11 June 2016 at the Vilhelmsborg national equestrian centre, where they have to show current form.

The Danish team for Ermelo will be announced after a final selecion competition on 1 - 2 July 2016 in Vlhelmsborg. The combinations have to ride the test on the first day and get a training day on the next, during which they are assessed by the committee.

Four pairs per age division will be selected to represent Denmark in Ermelo.