Where Are They Now? Cayenne W 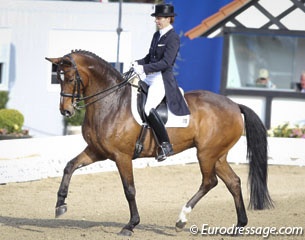 In 2007, the Westfalian mare Cayenne W wielded the axe of power at the World Young Horse Championships in Verden under Susan Pape-Draper. The elegant bay mare stood out with her lightfooted basic gaits and amazing level of training. She returned to Verden a year later but was distracted. Since then she only made a few more appearances on the German national show circuit in 2010 and 2011 and then disappeared. So where is she now?

Cayenne W was born in 2002 and bred by the breeders' group Wolfram Wittig/ Tiemann. She is by Carabas out of Bugatti W (by Bismarck x Maat I), the full sister to the Grand Prix sire Breitling W. 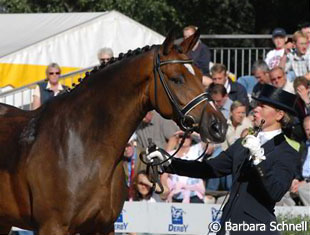 Cayenne's competition career started under Wolfram's student Kira Wulferding and their first claim to fame came in 2006 at the Bundeschampionate, where the mare became reserve champion in the 4-year old riding horse mares and geldings' class. In 2007 the mare moved in training with Susan Pape-Draper from Hemmoor, Germany.

Japanese Akemi Tanaka purchased the mare in February 2007 based on a video and on good faith of Ingo and Susan Pape's judgment. She saw the mare in real life for the first time at the 2007 World Young Horse Championships on 1 August 2007, where three days later Cayenne W won the World Champion's title as a 5-year old. The mare also qualified for the 2007 Bundeschampionate after winning the Haftenkamp qualifier, and landed fifth place in the Finals in Warendorf after winning the first two rounds there. 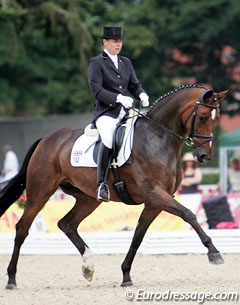 In 2008 Cayenne W returned to the World Young Horse Championships in Verden, but in the finals the mare was spooky and tense and landed 14th place. The duo again qualified for the Bundeschampionate by winning the Bargstedt BuCha selection trial.

In 2009 she made the transition to small tour level and one year later was campaigned on the Nurnberger Burgpokal circuit for developing Prix St Georges horses in Cappeln, Lingen, and Verden. In the spring of 2011 the horse competed in the Louisdor cup circuit for Developing Grand Prix horses in Hagen and Hamburg but never really topped the leader board. Her show career ended in the autumn of 2011 when Susan Pape rode her in the Grand Prix at two more regional shows in Wingst-Dobrock and Buchholz in der Nordheide in North Germany.

Since then Cayenne W has disappeared from the competition scene.

In the spring of 2012 the mare was sold as a Grand Prix horse for American Mary Alice Malone of Iron Spring Farm, but she never made it back to the show ring. 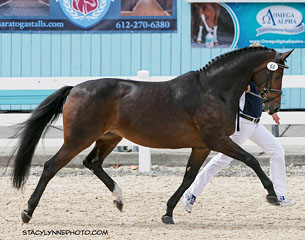 Cayenne W is now a successful broodmare in the Iron Spring Farm breeding programme and has produced one foal so far, the yearling filly Kasandra ISF (by Florianus). She is now confirmed in foal to UNO Don Diego for a 2017 baby. Cayenne W was presented in-hand at the 2014 Dressage at Devon breed show, where she won the Westfalian class and placed third in the 4-year old and older Yeld Mare division.

Like a true, happy broodmare Cayenne W now goes out in the field all day with the other open mares at Iron Spring Farm in Coatesville, PA, U.S.A.