Carl Hester "Appalled" that Uthopia will be Auctioned 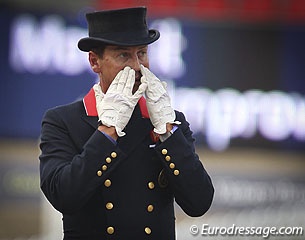 The horse will be sold by Wilsons Auctions as part of their Prestige Auction on Friday 27 May.

Carl told British Dressage: “It’s been a distressing experience for us all and with a very unhappy end. ‘Uti’ has been part of the family for 11 years and is a yard favourite. Quite simply, I’m appalled that it’s come down to this. I’m already working hard to find backers to help me buy him and give him the very best care in retirement he deserves. I owe him so much and my immediate concern is for the horse’s welfare. I just want him home to spend the rest of his days at our yard, cared for by those who adore him.”

Uthopia is a Dutch-bred dark bay stallion by Metall, born in 2001 and was found by Carl as a four year old. With Carl riding, he won a total of five Championship medals including Olympic Team Gold in 2012 and two individual silvers at the 2011 European Championships.

Uthopia last competed under Charlotte Dujardin at the 2016 CDI-W Amsterdam in January.

"We are all shocked," Hester told Eurodressage. "He deserves better."