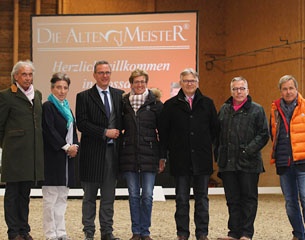 At the invitation of „Dressur-Akademie Silvia Iklé“, an engaged expert panel discussed the future of dressage at the Die Alten Meister forum in Gossau, near Zurich, Switzerland, on 23 April 2016. Some provocative approaches were put to the fore: Should judges be tested psychologically beforehand? Do we need cameras in the warm-up arena and should the vet-check be cancelled?

"Ride, judge, regulate: How to keep the measure" was the topic of the forum, which is part of the popular learning series "Die Alten Meister" that took place last Saturday in the great indoor arena of „Stall Eisfeld“ near Zürich in Switzerland. To anticipate it – even renowned international dressage experts on the panel could not answer this question conclusively. However the 350 dressage enthusiasts attending witnessed a committed discussion around the future of their sport.

"Dressage needs urgent innovation and improvements – an event like this one contributes to the process," said Luxembourg dressage judge Christof Umbach. The FEI judge was responsible for some of the most pointed statements on the interesting afternoon. Yet when "Alte Meister" initiator and moderator Frank Henning confronted him with a peculiarity of the Swiss dressage – judges can judge their own students in Switzerland – he showed understanding after initial resistance. "My first reaction was: this is a no go! But then I was telling myself, probably it needs to be that way in Switzerland because there are not enough dressage experts. I see no problem if the coach who judges his students, has enough backbone to do it honestly," said Umbach. International dressage rider and Olympic Champion Heike Kemmer from Germany agreed with him: "It should not be a problem when openly dealt with it and there is no secrecy."

Judges in the Centre of Attention

The quality of the judges remains a key issue for a large part of the discussion. Both Umbach and Kemmer complained that judges are not  checked and supervised enough: "Once you are a judge, you will remain it up to the age limit," they stated. Thomas Häsler, Swiss FEI steward and judge, however, appealed to individual responsibility: "As a judge, the riders expect that I am independent and competent. So it is my very own responsibility to educate myself and study the matter intensively". From the audience, Swiss dressage Jjudge Susi Eggli mentioned a central point: "I do not know one single judge who does not want to do a good job. But with judging it is the same as with riding: you either have an understanding for the horse or you have none." Christof Umbach agreed with her: "You can visit as many courses as you want, to be a good judge, you must be a horse person." When moderator Hennig asked what Umbach thinks of a professionalization of the judging corps,  Umbach replied: "This is also being discussed and I am sure that it will happen in the top level sport, the only question is when."

Facing pressure from the public judges are more and more exposed. Umbach states that it is absolutely required for judges to have strength of character in addition to expertise: "I would welcome it, if an independent psychologist analysed the human qualities of a candidate before he is admitted as a judge."

This strength of character, as well as a good common sense and intuition, are also highly in demand for FEI Stewards. "You should not be afraid of big names, but it always it depends on how and when you address someone," said FEI Steward Thomas Häsler. To support the stewards, Umbach, who organizes a dressage event himself, spoke up for cameras in the warm-up arenas. The Media and the Veterinarians

An annoyed Heike Kemmer stated that in her opinion "whole championships have fallen into the water because the press reported only on one scandal or doping case." Former equestrian journalist Peter Jegen had to agree that the media, due to economic pressure, actually has a tendency to scandalize certain subjects: "This is a development I personally see sceptically." He expects an honest discussion based on facts in the press, but he also passed the ball onto  the athletes and officials and asked them "not to see the media as an enemy."

While the first rider outside the arena prepared her horse for the live training session with Heike Kemmer, the presenter gave the platform to Marco Hermann. The Swiss FEI vet responded to another provocative remark by Christof Umbach, who is in favour of cancelling vet-checks, inter alia, "because there are more accidents happening in the vet-checks than while riding." However Marco Hermann countered him calmly and confidently: "The vet check is not only making sense, but is a must!" Although he has only 4 to 5 minutes per horse, he’s able in this short time to make himself a picture of the physical and mental fitness of the horse. 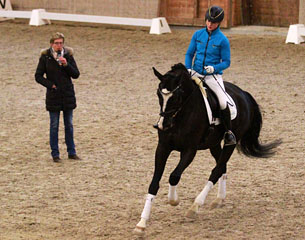 After a generous aperitif, the public could follow a demonstration on correct riding, improving and evaluating lessons. Heike Kemmer coached  three talented six- to ten-year old dressage horses from the Birkhof-Stud and their young riders while addressing the audience. The riders, as well as the public, benefit a lot from this lesson with the Olympic champion.

After a successful day, host Silvia Iklé was more than happy: It was a great afternoon with great experts – and I hope it contributed a little to keep our beloved dressage sport fair and exciting in the future.“

by Angelika Nido for Eurodressage