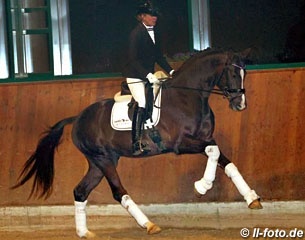 The Baisy-Thy (BEL) based Samyn of HC Stables has been the sudden new appearance on the international dressage and breeding scene, heavily investing in top quality young dressage stallions and horses, which were all put in training with Fiebelkorn in Germany.

HC Stables acquired the 2015 Oldenburg Licensing Champion Bonds (by Benicio x Sir Donnerhall I) for 500,000 euro at auction, but at the time it was stated that a syndicate invested in the horse. At the 2015 Hanoverian Stallion Licensing HC Stables bought Dow Jones HC (by Don Frederic x Fidertanz) for 220,000 euro. She also bought the Oldenburg bred Fuchsberger (by Fidertanz x Sandro Hit) at the 2015 Oldenburg Spring Elite Auction for 142,000 euro.

Samyn has done business with Andreas Helgstrand before. She bought the 4-year old Oldenburg licensed Veneno (by Vitalis x Diamond Hit) from Helgstrand, who had purchased the chestnut at the 2014 Oldenburg stallion licensing auction for 400,000 euro. She also acquired the 3-year old licensed stallion Furst William (by Furst Wilhelm x Lord Sinclair) from the Danish horse dealer in July 2015. 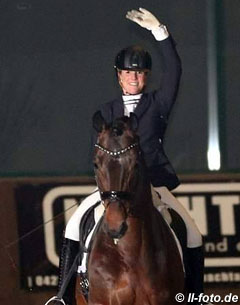 "These three horses were selected because of their exceptional ability, so it makes sense that HC liquidates some of their investment while their value is rising,' Fiebelkorn told Eurodressage. "The stallions are gone but we keep working together. I must say its a great loss for my team, Stud Famos and all German breeders, but from all of us we wish the best success for these three exceptional stallions and their owners."

Samyn is a dedicated dressage rider horse, having represented Belgium at the 2015 World Young Horse Championships in Verden, Germany, aboard Forever Love (by Floriscount x Rotspon).