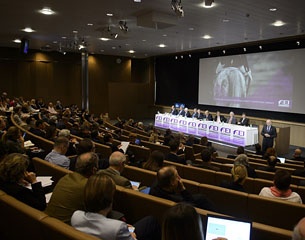 Olympic Press Committee member Alan Abrahamson gave a reality check to a record number of delegates at the FEI Sports Forum as almost 320 participants debated the future shape of equestrian sport in Lausanne (SUI) on Tuesday 5 April 2016. “What you’re facing is nothing less than a reality check for the sport”, the former Los Angeles Times and NBCOlympics.com correspondent said.

“A lot of the public don’t know anything about equestrian sport. There are tons of new sports trying to knock on the Olympic door. Skateboarding, surfing and rock climbing are almost guaranteed to be on the Olympic programme for Tokyo because they are perceived as cool and sexy sports. You know you’ve got a great sport. You have that core audience, what you need are more and younger fans. This is not a crisis point. It’s not a moment of desperation for you, it’s a moment rich with opportunity.”

Alan Abrahamson, who has covered eight Olympic Games over the past 18 years, was speaking at the opening session on today’s programme, focusing on the changing communication landscape and how to use new media to reach a massively increased fan base. He was joined on stage by Richard Johnson, FEI Director of Corporate Communications, who outlined the FEI’s global campaign in the build-up to Rio 2016 and beyond.

Discussions then moved onto proposed changes to the competition formats for the three Olympic disciplines and the World Equestrian Games. Consensus on the need for change was reached and, although there were still some dissenting voices, there was also substantial support for the concept of a reduction to three-member teams and removal of the drop score.

Panellist Charles Balchin, Head of Programmes at IMG Production, was enthusiastic about the qualities of equestrian sport for broadcast media. “This sport, it’s worldwide. Very few others are and the whole gender equality thing it’s brilliant. You’ve got horses, you’ve got fantastic athletes who talk brilliantly. The future is beyond exciting.”

FEI 1st Vice President John Madden spoke of how having three-member teams would bring in more nations across the Olympic disciplines, as well as at the FEI World Equestrian Games™. “Universality we have control over”, he said. “It’s simple math. We have 200 spots and 40 National Olympic Committees at the moment. With the proposals on the table, we still have 200 spots and we can increase the number of flags to about 55. Three per team gets us 25% more.”

There was general agreement about the importance of bringing in new nations to the Olympic Games. “I agree 100 percent how important it is for smaller nations to have athletes at the Olympic Games”, FEI Executive Board member Frank Kemperman said. “It is the best shop window for our sport.”

Francesco Ricci Bitti, who will be standing unopposed for the presidency of the Association of Summer Olympic International Federations (ASOIF) later this month, was also adamant about the need for change. “But don’t do it only for the Olympics, do it for your sport. Find a compromise between the values your sport represent and the changes you need to make to make your sport more attractive. Be aware that the Olympics, the most attractive product of multi-sport in the world, has to change globally.”

The drop score and the role of potential reserve horse/rider combinations were debated at length, and the session was extended to allow discussions to continue, particularly as the focus had been more on the Olympic formats than on the World Equestrian Games and the non-Olympic disciplines.

“I would like to reiterate how pleased we are”, FEI Secretary General Sabrina Ibáñez said in her session wrap-up. “It was necessary to allow each and every one of you to speak your minds. I know we spent a lot of time on the Olympic formats but it was needed. We will continue to consult with you and many of your ideas will be taken on board.”

The final session of the 2016 FEI Sports Forum provided delegates with an opportunity to focus on the specific proposals for revisions to the Eventing Rules. The range of proposals tabled for discussion included new minimum entry requirements to open up Olympic Games and major Championships to be more accessible to new nations, new competition formats, updated scoring systems, and plans for enhanced presentation and explanation of the discipline.

Wrapping up the session, FEI Secretary General Sabrina Ibanez reminded everyone that discussions on both the competition formats and the Eventing Rules revisions have not ended and asked delegates to continue to provide thoughts on all the points that had been debated.