Florenciano Sold but Remains in Germany 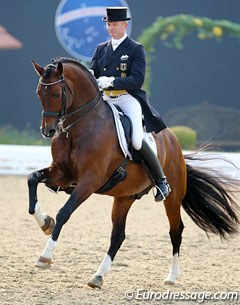 Florenciano is bred in The Netherlands by H. van den Brink and is by Florencio out of Lundi T (by Havidoff x Lector). He is registered in the German Equestrian federation database as owned by Ralph Uwe Westhoff, although Gut Neuenhof as well as Sandra and Axel Schürner of Equus Invest AG have been mentioned as the owners of the horse.

Presented by Eugene Reesink, the bay stallion got licensed with the Westfalian studbook in 2006 and did his 30-day Stallion Performance Test in Munster-Handorf in 2007. He scored 8.93 for dressage and 8.58 for show jumping. So far Florenciano has sired three licensed offspring: Facebook, Farbenspiel and Fine Step.

He was first competed by Ingrid Klimke in the riding horse tests in 2007 and 2008. Hermann Burger took over the ride in 2010 and competed him in the Bundeschampionate qualifiers.  Burger trained the stallion up to Prix St Georges level and did his last show with him at the local event in Andervenne in October 2011.

The stallion disappeared from the scene for several years and made his show come back in 2014 under Hubertus Schmidt at Grand Prix level. They showed at international events such as Hagen, Perl-Borg and Aachen. At the 2015 German Championships the pair only contested the first round, the Grand Prix, and finished 19th out of 20 starters.

Florenciano has now left Hubertus Schmidt's barn as he has been sold to the sponsor of Marc-Patrick Fritz, who runs equestrian centre Johannishof in Bad Nauheim, Germany.

"There were serious inquiries for Florenciano and in agreement with the owners, the Schürner couple, the horse has been sold to the sponsor of Marc-Patrick Fritz," Hubertus Schmidt commented.