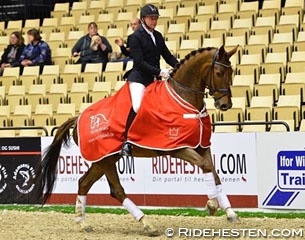 The Danish Warmblood young horse championship is restricted to 5-year olds (born 2011) and the horses must be DWB registered, unlike the annual Danish Young Horse Championships held in Odense, Denmark, each October.

This year Charlotte Dujardin was invited as guest judge rider and helped pick the winner of the championship. Thirty-three horses were presented by their riders and assessed by a panel of which 29 were test ridden by Dujardin.

The chestnut Jukebox, bred by Jytte Kolster and ridden and owned by Michael Sogaard, won the championship with a total of 929 points.

Emma Ahlberg steered the Danish mare Liva Enshøj (by L'Espoir x Midt-West Ibi-Light), bred by Klaus Fogh, to the reserve champion's title with a total of 911 points. Dujardin put this horse first and Jukebox second but the combined scores after the presentation by the horse's own rider made Liva finish second.

Dujardin's favourite horse of the clas was F.A. Hallow (by Temptation x Landtinus) which she gave two 10s. The horse moved from a 14th place after the first round to a fifth place in the final ranking.

The top 9 of the 2016 Danish Warmblood Young Horse Championship was: