FISE Sues Truppa for the Sale of Eremo del Castegno 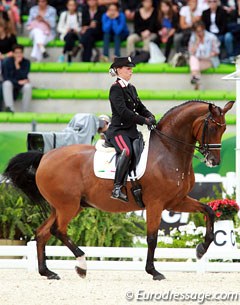 The Italian Equestrian Federation (FISE) has started a lawsuit against the former owner of Eremo del Castegno for a breach of contract. Enzo Truppa's Equestrian Centre Monferrato is being sued for selling the horse before the 2016 Rio Olympic Games despite an existing contract to keep the horse secured for Italy.

In 2012 FISE renewed an agreement with Truppa that Italy's number one Grand Prix horse Eremo del Castegno (by Rohdiamant x Weltmeyer) would be retained for Italy until the 2016 Olympic Games in Rio de Janeiro, Brazil. The Federation gave 280,000 euro to Truppa from 2012 till 2015 for keeping the horse secured for Italy until Rio.

According to Italian equestrian website Cavalli e Segugi, Truppa reacted that he is surprised to be sued by an external legal office hired by FISE for this breach of contract. The international 5* dressage judge and trainer of his daughter Valentina Truppa reacted that, "(this decision to sue) follows a large email exchange which took place with FISE the past two months in which we tried in vain to explain our reasons for sale and to demonstrate our good faith. We regret to see that the federation feels more inclined to drag us to court than to rejoice in the Olympic qualification which Valentina achieved for Italy."

Valentina Truppa secured an individual qualification slot for Italy at the 2016 Olympic Games with Eremo del Castegno. However, this slot is assigned to the country and FISE can decide who to send to Rio based on performances of the riders during the 2016 show season.

According to brand new selection criteria set by the FISE Dressage Committee and published on 20 January 2016, FISE will select its Rio rider based on:

Italy's highest scoring dressage riders at the moment also include Anky van Grunsven's student Norma Paoli on her new horse Zandor and Pierluig Sangiorgi and Nadine Capellmann's former Grand Prix horse Raffaldo, which scored a promising 67.580% at the 2015 CDI-W Stuttgart. Remarkably the horse's ownership was not changed in time before the Olympic ownership deadline. Currently only Truppa and Tiozzo have achieved the 2x 67%