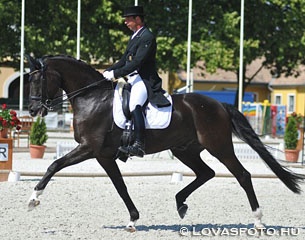 Deep Impact is a 13-year old Hanoverian gelding, bred by Bernhard Menke and owned by Robert Acs and Aniko Losonczy. He is by De Niro out of Rubina (by Rubinstein x Gutenberg x Akzent I).

The horse made his show debut late in life at age 10. He won a national Prix St George Special at the CDN Neu Anspach in September 2013 and took almost two years to return to the ring again at the same event in July 2015 where he finished 8th in the Intermediaire II.

Two months later the black gelding did his only international show, the 2015 CDI Fot, where he scored 65.526% in the Intermediaire II, 63.920% in the Grand Prix and was withdrawn from the Grand Prix Special.

Deep Impact is a surprise present for Andreas' wife Marianne Yde Helgstrand, who celebrates her 40th birthday with a big party on 5 March.