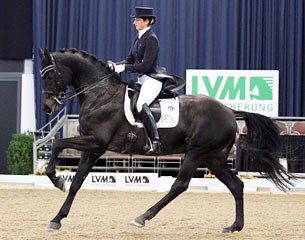 Check out the wonderful young and proven breeding stallions which Krusterhof stands for the 2016 breeding season:

One of Krusterhof's headline making sires this year is the 9-year old Westfalian bred Rocky Lee (by Rock Forever x Justinian xx x Urofino). He was a premium stallion in 2009, a finalist in the 2011 and 2012 Bundeschampionate and Westfalian Regional Champion in 2013. Rocky Lee has proven his worth as a breeding stallion, siring the 2014 Westfalian Mare Champion Rihanna and the 2015 Hanoverian Licensing premium stallion Revolution, who caused a sensation when he sold for 1.2 million euro to Andreas Helgstrand in Denmark. Rocky Lee has a German Breeding Value Index of 151 points. This dark bay stallion is currently being trained to Grand Prix level by Stefanie Wolf.

The 3-year old Westfalian bred Adonis (by Ampere x Don Corazon x Rosenkavalier) is a newly licensed young stallion. This long-legged dark bay colt is very typy, elastic and has stand-out basic gaits. He is closely related to the Westfalian mare champion Anky and makes an excellent choice for breeders looking for the best genetic references. 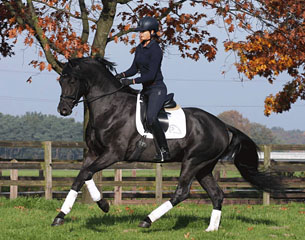 The 4-year old Rhinelander bred Arango (by Apache x Fidermark) has shown his talent in his first competition year. Under Stefanie Wolf he competed three times in the riding horse tests and won them all. This charming black stallion had three outstanding basic gaits with an exceptional canter and top character. His first crop of foals is expected this spring.

The 7-year old chestnut Thoroughbred Asagao xx (by Tertullian xx x Tagel xx x Pharly xx) produced his first crop of foals last year and impressed breeders with quality offspring. He sired three foal show champions and is an equally strong producer of dressage as well as show jumping foals. This internationally competed young eventing stallion passes on nobility and is claiming the spotlight with his get year after year.

The 5-year old grey Trakehner Adorator (by Cedrus x Agar x Kerman) is an excellent choice for breeders who want a genetic alternative from the commonly used lines in Germany. The Polish bred Adorator is a half brother to the licensed show jumping star Avatar. He is from an exquisitely bred line with foundation stallion Hyperion xx in his genes as well as British top Thoroughbred blood. Adorator is a typy stallion with a huge canter and a very expressive trot technique. He is the reseve Polish young horse champion. 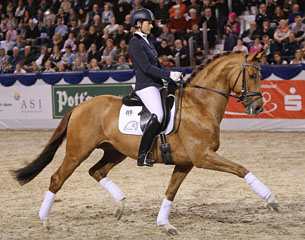 The 4-year old Hanoverian bred Dark Sensation (by Destano x Weltmeyer x Donnerhall) is the perfect combination of rideability and highly proven bloodlines. This talented star for the future impressed his rider and trainer with his willingness to work and easiness to train. He is uncomplicated to ride and handle and expressive in all three basic gaits. He has competed in one riding horse test so far and received straight 8s. Quality is no co-incidence with this beautifully bred black stallion! 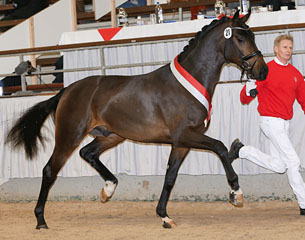 The 7-year old Westfalian stallion Golden Challenge H (by FS Golden Moonlight x FS Challenger x Kirby Cane Bugler) descends from Johann Hinnemann's prized pony line based on dam Kaprice, who produced licensed stallions De Vito I and II and Bundeschampion Top Yellow. Golden Challenge H is a smashing dressage pony with an amazing potential for show jumping. This double talent in a palomino jacket is the perfect option for pony breeders who want to get the maximum out of pony breeding. This stallion is currently being trained and competed by Coby van Baalen's student Annelotte Felix at FEI Pony level in The Netherlands. Frozen semen is available at Krusterhof. 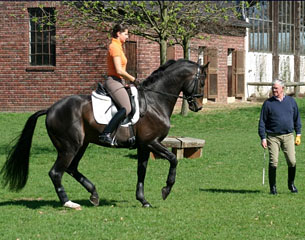 Krusterhof's Grand Prix stallion, the 14-year old Oldenburg sire Sorento OLD (by Sandro Hit x Donnerhall x Pik Bube I), completes this year's stallion roster. Sorento OLD is a highly decorated, internationally competed Grand Prix dressage horse. He was Hauptpremium winner, the VTV Oldenburg Stallion of the Year 2011, a finalist in the 2010 Nurnberger Burgpokal for Developing Prix St Georges horses, and has booked 46 placings and victories at Grand Prix level. Sorento OLD is one of the most successful Sandro Hit offspring in the show ring to date! He has sired the Westfalian Riding Horse champion Sonett and the Danish Young Horse Champion Esperance. He is the dam sire of the Riding Horse Champion Rockson.  He has sired several licensed sons, including 2014 Westfalian premium stallion Sonnentanz.

Come and Discover the Krusterhof Stallions

Krusterhof offers breeders a very interesting and versatile collection of stallions with highly modern and acclaimed genetics. Feel free to come by the stallion station to visit the stallions in person and watch them in their daily training. 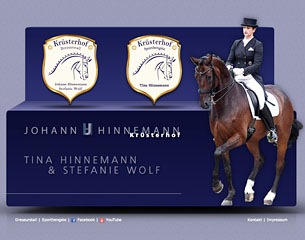 "The consistent training and development of their sport career is close to my heart," said Krusterhof owner and Grand Prix dressage trainer Johann Hinnemann. "I daily supervise and motivate my enthusiastic team, which consists of Steffi Wolf, Martin Pfeiffer and Marina Welbers. Our motto for the breeding stallions is that they have to prove themselves in sport. That is our focal point each day."

Veterinarian Bettina Hinnemann is specialized in fertilisation and embryotransfer. She leads the stallion station and gives breeders the opportunity to bring their mares to Krusterhof or she will come to any breeder in the vicinity of Voerde, Germany, for help and advice at home.

Krusterhof's stallions will be presented live to the public at the annual Stallion Show in Voerde, Germany, on 26 March 2016 as of 16h00.

For more information, visit the Krusterhof Facebook page or www.johann-hinnemann.de