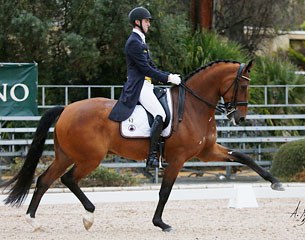 Rothenberger, Hester and Dujardin went up onto the podium for the Zetta Sport Music Grand Prix at the CDI3* in Jerez de la Frontera, Spain on Thursday 25 February 2016. “The Rain in Spain” is not only the title of that beautiful song from My Fair Lady but the actual situation at the CDI3* at the Royal Andalusian School of Equestrian Art in Jerez. The 28 riders in the Grand Prix Zetta SportMusic could demonstrate the truth of that statement.

Young German rider Sönke Rothenberger and Cosmo, a 9-year-old KWPN gelding by Van Gogh x  Landjonker, were the winners of the test and showed themselves to be resistant to the downpour. The two are an amazing couple; the gifted horse demonstrated much movement and a lot of horsepower while his young rider showcased his talent. Yesterday they obtained their swimming diploma at the Royal Andalusian School of Equestrian Art, after dancing in the rain in view of the beautiful Jerez palace. 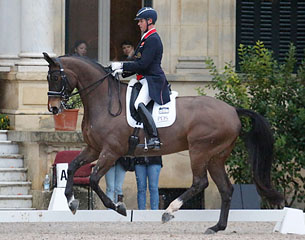 It was one of their very first Grand Prix rides, as they only debuted in 2015 in the category. Monica Teodorescu, the German team coach, stated very drily but with a big smile, “there is always space to improve.” She had flown in for the occasion as there are several German combinations participating, including the Rath-Linsenhoff family with the siblings Matthias Alexander and young Liselott  Marie riding the beautiful Golden Girl, who have garnered several test wins over this competition. Matthias had been the star on Thursday’s opening tests, riding a lot of young horses and achieving three victories.

Back to Sönke and Cosmo they were awarded a ten by the judges for their initial performance including halt and salute. They received some nines for the strong trots and the passages and lots of eights throughout the test for many exercises. Their performance took place in the pouring rain and strong winds, which possibly led to their only fault in the flying changes. 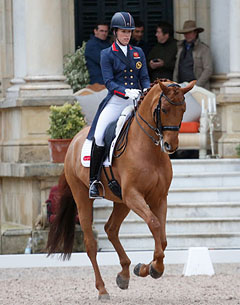 Second and soaked was how his experience was wryly described by Carl Hester, who was happy with the results of his three horses. Wonderful Barney, which is the name affectionately used for Nip Tuck (by Don Ruto x  Animo) at his home, showed even a more elegant trot under the rain, while the half halts and the pirouettes of the pairing were amazing. Charlotte Dujardin scored just below the two leaders; riding Barolo (by Breitling W x Hitchcock) in their first international Grand Prix, they definitely had a good start with a score of 73.280%. Both Carl and Charlotte recommended learning how to ride in the wet after the test, casting their minds back to the WEG in Caen 2014. Watch their interview.

Gonçalo Carvalho and Batuta seem to have found a better fit, as they did a nice test yesterday which was much more stable and less tense. There was another young Lusitano horse, Coroado from Finca Tinea and presented by María Caetano, which also performed a very pleasing test. These two combinations ended up in 4th and 6th place respectively within 28 Warmbloods. Richard Davison riding Don Bettino (by Don Primero x Painters Row xx) won the Intermediate B category with a total average of 70.159%, attained under so much pouring rain it even caused the loudspeaker system to fail temporarily. It was his second win in this class and his debut at an international Grand Prix. The Zetta Sport Music CDI3* REAAE Grand Prix will be on in both weeks.
Zetta Sport Music is offering the first Freestyle Music to the winners of tomorrow’s Grand Prix Special on Sunday 28th of february. A made-to-measure Freestyle music package specially composed for them and recorded in a studio by the orchestra and singers of the world-renowned Mariinsky.