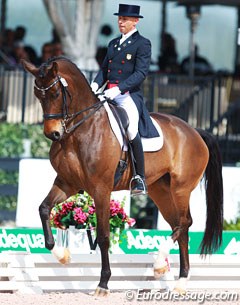 The three months of competition in Wellington, Florida, during the 2016 Dressage in Florida show season is a non-stop string of national and international competitions. America's best Grand Prix riders all rallye now on the East coast to competes one another, while a group of European amateur and professional riders have decided to snowbird in Florida this year.

The CDI 5* competition in Wellington is the most interesting one of the season as it draws out all the big time riders due to the large purse of money to be won. If you have to pick one show to attend in Wellington each year, choose the weekend of the 5* as it features a huge field of big and small tour riders in the 5*, 3* and 1* classes throughout the week. Most other weekends in Wellington are more of the same.

The CDI 5* in Wellington took place on 10 - 14 February and remarkably it was the 3* Grand Prix class that became the most exciting one to watch with young talent rising to the top and new combinations making their debut. The 3* Grand Prix class on Wednesday 10 February 2016 featured an action packed field of 37 competitors.

The class was won by Steffen Peters on his young, 9-year old Rhinelander mare Rosamunde (by Rock Forever x Fidermark) who is now in her second season at Grand Prix. The last time Eurodressage saw Rosamunde live was at the exact same show in Wellington in 2015. While the mare is brimming with talent, she did not show as much improvement as expected in one year. She was ridden in quite a long frame with the head often coming behind the vertical. In the passage the hind legs needed to show more understep and overall the horse lacked collection to stay in a closed frame. She is very gifted in piaffe and sits very deeply but still struggles with smooth transitions in and out. The zig zag had much ground cover, but in the tempi changes she became short and swingy. The pirouettes are very promising though and she can really sit and make them small. Rosamunde is very young at Grand Prix and has plenty of time to develop more strength from behind so that her self carriage will improve. The judging panel - consisting of Zang, Whitham, Rockwell, Iacobaeus, de Wolff - liked what they saw and awarded the test with 75.380%. 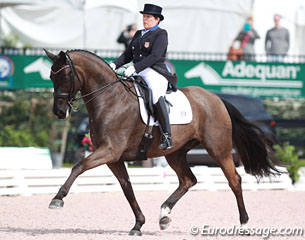 U.S. A-team rider Shelly Francis presented her second Grand Prix horse, Danilo, in the 3* Grand Prix and finished second. Pat Stempel's 12-year old Hanoverian by De Niro x Andiamo is a chunky body builder with an amazing piaffe and passage though it was still ridden quite conservatively. He lost the elasticity in the trot half passes and the trot extensions were rushed and hasty though the third extension had good ground cover. The contact was slightly stronger on the right rein. The highlight of the test was the super uphill extended canter. The pirouettes were small but need to improve on the balance. Danilo is certainly a star for the future. They scored 72.240%

The most exciting combination of the entire show was rising star Kasey Perry-Glass on the 13-year old Danish warmblood Goerklintgaards Dublet (by Diamond Hit x Ferro). The duo made their international Grand Prix debut just one month ago and is already the strongest American Rio Olympic Team contender alongside anchors Steffen Peters and Laura Graves. The dark bay Dublet wa previously owned by Danish Grand Prix rider Anette Ejlersgaard, who seemed to have put her riding career on the back burner. In 2013 Dublet sold to the California based Perry, who is now in Florida to build her show career and gain mileage and exposure. In the Grand Prix Dublet excelled with amazing passage work that was regular and balanced. The transition to piaffe was smooth and in piaffe the horse had good sit. The horse crept a bit forward in the second piaffe. Overall he could be more up in the bridle in piaffe and passage, but the metronome rhythm is exceptional.  There was a break in the first trot extension, bu the trot half passes were buoyant. The pirouettes were super and the one tempi changes excellent. This pair is destined to score much higher than the 71.020% they got for that test.

Another thrilling Wellington highlight was Anna Marek on the ponyesque but talented, already 15-year old Dutch warmblood Unico G (by Negro x Animo). The pair had their international Grand Prix debut already back in 2012, but despite gradually climbing scores they never got any spotlight, until now! The black Unico G is not a real show stopper looks-wise, but wait until you see him move. He's a bit short in the frontleg and not the most modern type, like most Negro offspring, but he is gifted in the collected work. He has an amazing regularity and bounce in passage and can really take the weigh on the hindquarters and maintain the rhyhtm in piaffe. He is overall very solid in the movements and Marek sits quietly in the saddle giving invisible aids to her obedient horse. Keep an eye on that pair! They scored 69.540% 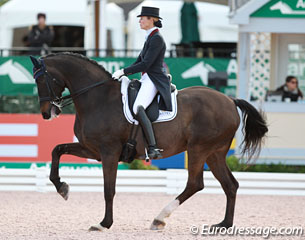 Charlotte Jorst made her Florida CDI debut on the 14-year old Danish bred Akeem Foldager (by Akinos x Loran) in the Grand Prix. The horse is a powerful mover and has so much talent, but bolstering it is quite the task. He appeared very strong in the bridle, even though Jorst kept a quiet posture. The piaffe and passage can earn 10s with their scope and bounce, but both lacked regularity. Akeem is over-excited in passage, takes spectacular steps, then a few irregular ones, then he gets shorter struggling to find the proper evenness. In the piaffe he produced textbook sit, but ground his teeth. The collected walk was tense, the one tempi changes croup high. Jorst did a good job, though, steering this powerhouse through the test. They scored 68.960%

Laura Tomlinson made her debut on the 10-year old Westfalian mare Rosalie B (by Rubin Royal x Newcastle x Diamantino) and scored 67.900%. The dark bay mare is very expressive and incredibly lightfooted in trot. She was crooked to the left in the body in piaffe and passage but the silhouette is very promising. Overall it showed that the partnership is brand new as they were not yet on the same communication level. The mare will improve considerably when she gets more on the hindquarters; in their first Grand Prix she was still leaning too much on the forehand.  Laura's second ride, the Holsteiner mare Unique (by Carpaccio), scored 67.640%. The tall and long legged Unique is quite inconsistent in the pole; she has huge gaits but still struggles with her self carriage. 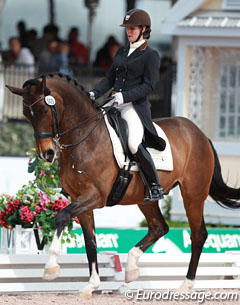 Tomlinson's cousin, American Beatrice Marienau, competed 17-year old Dutch warmblood gelding Stefano (by Gribaldi x Actueel) and landed 9th place with 67.640%. She later on won the Grand Prix Special. Stefano is a typical Gribaldi, not the most flashy, but just elegant and very consistent. The horse had his mouth open a bit too much and the nose needed to be more out but the passage was sweet and the rhythm was ok in the piaffe, even though he does not flex the hocks much. The one tempi changes were lovely.

Canadian Chris von Martels made his debut on Tinne Vilhelmson's hyper sensitive Divertimento (by Di Versace). The Canadian did a good job riding this high strung bright bay gelding, who tends to hollow his back a lot and got tense in the piaffe and passage. The pirouettes were the strong point of the ride. They scored 66.700%

German Christoph Koschel is currently campaigning the 10-year old Dutch stallion Butopiar (by Johnson), who was shown as a youngster by Estonian Sirly Tillmann.  The chestnut stallion is absolutely gorgeous and a typical Johnson offspring. This young Grand Prix horse still needs to take more weight behind and move the hind legs under the body. In the piaffe he snatches heavily with his right hind leg and the flying changes to the left are laboured. Still the horse is an eye catcher. They got 65.840% 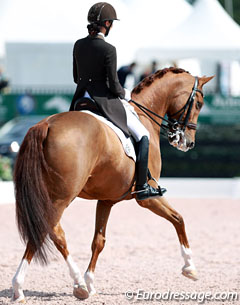 American P.J. Rizvi had her hands ful with her new Grand Prix horse, Unlimited, which they bought a year ago after Dutch A-team rider Stephanie Peters lost the ride when the owner decided to sell him. The Dutch warmblood gelding brought his sire Jazz to the party and saw ghosts in every flower pot, corner, person and sound. Rizvi stayed focused and did her absolute best to save the biscuit, but her schoolmaster did not live up to his role as professor at all. They scored 62.520%. Aboard Breaking Dawn (by Flemmingh), the horse coach Ashley Holzer rode at the 2010 World Equestrian Games in Kentucky, Rizvi definitely had more fun and was able to show her skills. The amateur produced a neat Grand Prix test, which earned her 65.480%

German born Palestine Christian Zimmerman (né Brühe) presented his new Grand Prix horse Aramis in the 3*. The 11-year old Dutch warmblood gelding (by Scandic x Papillon) is a very promising horse with good elasticity and bounce in the movements. Aramis takes much after his sire Scandic and shows the same silhouette in piaffe and passage. The piaffes were still timid and a mistake in the two tempi changes pulled the score down in the Grand Prix. Zimmermann clearly recovered in the Special and went from a 62 to a 66% with this new star. 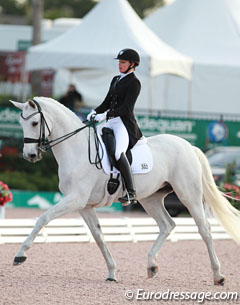 American Sarah Daehnert made her CDI debut on schoolmaster, 14-year old Hanoverian mare Half Moon Delphi (by Dimaggio). The grey mare showed what a true schoolmaster is like: a helping hand for its inexperienced rider who wants to learn from the best. Delphi looked happy and in her element in the show ring, without pressure. There was no collection in the trot half passes nor passage, but she helped her rider in the piaffe. They still have a long way to go but Delphi is certainly a great partner for this journey.

Another horse that showed amazing willingness to work with his rider was the Friesian Daniel de G, a 15-year old by Abel x Jacob. Brazilian Raimundo Maciel Dum Nascimento is trying to qualify for the Brazilian Olympic team but needs 64% scores for that. For his Wellington Grand Prix he earned 62.280%. 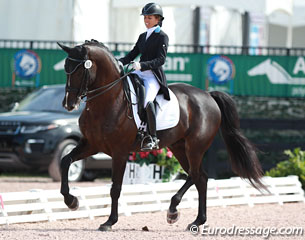 Argentinian Maria Florencia Manfredi has a very interesting horse in her Argentinian bred, 10-year old gelding Bandurria Kacero, who is sired by the Belgian warmblood show jumping stallion Wonderboy St. Ghyvan (by Darco x Voltaire) out of an Argentinian unregistered mare. The rider with no name, the horse with no name does not easily get high scores from a conservate, name-recognizing panel of judges, but there certainly more points to be earned in that Grand Prix test than the 60.640% Manfredi got. Kacero has a solid  passage. The rider had problems in the piaffes though, yet the highlight of their test was the straight, uphill tempi changes which were unrivalled by the 27 higher ranked combinations in that Grand Prix class!