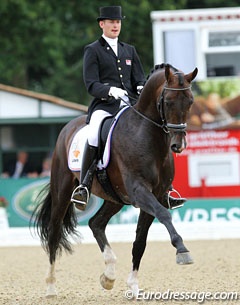 Under Theo Hanzon, the horse won the 2009 Pavo Cup, the 2010 and 2011 KWPN Stallion Competition and Dutch Indoor Championships at ZZ-Zwaar level. They represented the KWPN breed at the 2010 World Young Horse Championships in Verden. Since 2014 Tommie Visser rode the horse and he last competed him in an Intermediaire II class at a national show in September 2015.

Visser kept the ride on the stallion until the autumn of 2015, then John Tijssen briefly took over the reins, but owner Van Uytert has now allocated the ride to Dinja van Liere.

"He's an incredibly fun and sweet horse," Van Liere told Dutch equestrian magazine De Hoefslag. "Today I took him to a lesson (with Edward Gal) for the first time and he truly did his best. He's of course very tall. I don't know how tall exactly, but I think he's a giant. (...). In the past he's been with several different people so we have to get used to one another. I have no haste and we're just training now. We'll see where it will take us."