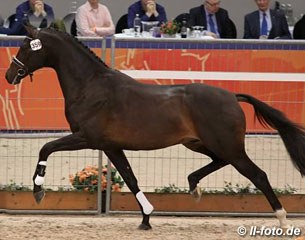 Igor (by Apache x Vivaldi) was proclaimed the champion of the 2016 KWPN Stallion Licensing held at the Brabanthallen in 's Hertogenbosch, The Netherlands, on Saturday 6 February 2016.

Bred by J. de Bruijn and owned by Ad Valk, Igor was the undisputed champion of the 2016 KWPN licensing. The dark bay excelled with his conformation and spectacular gaits. Igor is out of KWPN champion mare Crisjena. Jan Vink of Black Horses acquired the half ownership of this stallion at the licensing in a private deal. Shortly after the licensing, the stallion was renamed Indian Rock.

"This very well moving Apache son convinced each time that he's on the move. He has a royal conformation and extra special way of moving, with which he draws many fans," said Bert Rutten, the chair of the licensing committee.

Ierland (by Dream Boy x Jazz) became the reserve champion and sold privately to Andreas Helgstrand for euro. He is bred by stud farm Broere.

"This appealing Dream boy son has three good basic gaits with much ground cover and cadence," said Rutten. "He developed very well since the first phase."

The third placed stallion in the champion's ring was It's a Pleasure (by Dark Pleasyre), followed by Iniesta VDT (by Apache), Idool N (by Bordeaux), Indiana Jones (by Cupido), Incredible (by Charmeur) and Inferno M (by Davino VOD).

"The KWPN board of breeders gave us the task to be lenient in accepting stallion for the performance testing because we can test the horses better under saddle to achieve our breeding goals," said Rutten. "It wasn't a hard task todat and we were also able to select a couple of stallion who are interesting for diversity in the gene pool. I'm thinking of sons by Furst Wilhelms, Voice and Connaisseur."

At the KWPN Select Sale, the auction following the licensing, the price highlight was the chestnut Ixilon (by Johnson x Ferro) which sold for 85,000 euro to Philippe Lautier from France. Unlike the major breed societies in Germany, the KWPN society was unable to crack the 100,000 euro price barrier this year with its top selling stallion. The second most expensive horse was ID united (by United x Welt Hit II) which sold for 60,000 euro to domestic buyers. Ivar (by Johnson x Farrington) sold for 46,000 euro to Spain. Twenty-three horses sold at auction and the average sales price was 33,500 euro.